Despite public opinion and the facts, he intends to serve the Telecom Industry. Pai is behaving like he is still Verizon's lawyer, not someone required to serve the public interest.

Arlington, VA -- Ajit Pai, the Chair of the FCC, is on a mission to destroy the Internet by reclassifying it so that it is no longer a common carrier where we all have equal access and repeal net neutrality rules so Comcast, Verizon and A&T can discriminate based on content. 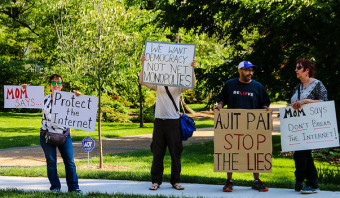 Net neutrality protesting outside of Ajit Pai's home on May 14, 2017. By Anne Meador, DC Media Group.

Net neutrality activists began a vigil at the FCC chairman's home in Arlington on Sunday, May 14 to protest. They will continue on Monday, Tuesday and Wednesday until the public meeting at the FCC on Thursday, May 18. Twenty people stood outside of his home holding signs urging "Save The Internet," "We Want Democracy Not Net Monopolies," "Ajit Pai Stop the Lies" "Protect the Internet" and "Equal Access for All."

The protest was supported by every neighbor who spoke to them, one even offered the use of their bathroom if net neutrality advocates needed it. Three of the participants were from the neighborhood and attended because the week before they found a door hanger describing Ajit Pai and the issue on their front door. The door hangers were placed on 200 doors in Pai's neighborhood so when the protest occurred,people would understand what was happening. 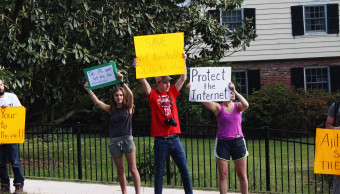 Some of Ajit Pai neighbors came out and joined the protest in his neighborhood. May 14, 2017
(Image by Eleanor Goldfield)   Details   DMCA

Some of Ajit Pai neighbors came out and joined the protest in his neighborhood. May 14, 2017. Photo by Eleanor Goldfield.

Pai has made it clear in public statements that he intends to repeal the Title II classification of the Internet as a common carrier. He also intends to repeal net neutrality rules that allow regulation so that there can be no discrimination in access to content on the Internet. The former Verizon lawyer is acting in the interests of his former employer and other big telecoms rather than in the public interest. He is announcing what looks like a sham public comment proceeding on May 18 since he has already announced his decision. It is going to take an overwhelming mobilization of people to prevent him from destroying Internet freedom. 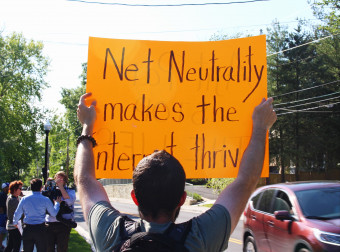 Lee Stewart protests outside Ajit Pai home on May 14, 2017. Photo by Eleanor Goldfield.

The Internet has been a vibrant tool for innovation, creativity, free speech and independent media and an engine for the economy because there is equal access. Under Title II, as it is currently classified, the Internet is a common carrier like electricity coming to your home. Title II is also essential for putting in place net neutrality rules as the DC Court of Appeals ruled when Verizon sued the FCC in 2014. Net neutrality is the idea that access to the Internet should not be based on content. If the content is legal then it should be treated like all other content on the web. Preference cannot be given to sites whose content is approved by the Internet Service Providers, e.g. Comcast, Verizon and AT&T, and corporations and people cannot purchase better service than others. Equal access for all is the current rule and we must protect it. 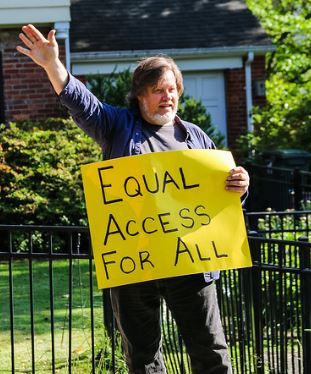 Kevin Zeese protesting outside of Ajit Pai home on May 14, 2017. .
(Image by Anne Meador of DC Media Group)   Details   DMCA

Kevin Zeese is co-chair of Come Home America, www.ComeHomeAmerica.US which seeks to end U.S. militarism and empire. He is also co-director of Its Our Economy, www.ItsOurEconomy.US which seeks to democratize the economy and give people greater (more...)
Related Topic(s): Ajit Pai Fcc Chair; Fed Regulatory Agency FCC; Net Neutrality; Net Neutrality, Add Tags
Add to My Group(s)
Go To Commenting
The views expressed herein are the sole responsibility of the author and do not necessarily reflect those of this website or its editors.