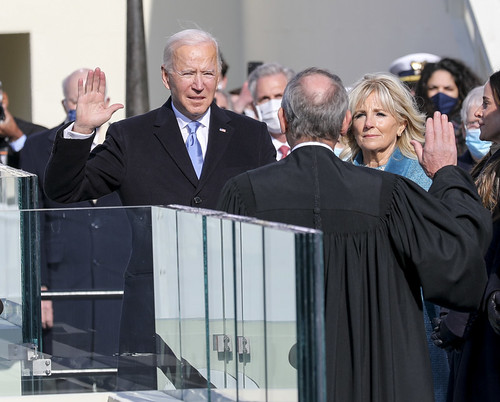 Joe Biden
(Image by US Department of State)   Details   DMCA

Duluth, Minnesota (OpEdNews) January 22, 2021: On January 20, 2021, like many other Americans, I sat in the comfort of my home and watched President Joseph R. Biden, Jr., only the second nominal Catholic ever elected president of the United States, deliver his inaugural address on television.

Of course, the first nominal Catholic elected president was President John F. Kennedy (1917-1963), whose inaugural address included the soaring rhetoric calling on us as American to ask not what our country can do for us, but what we can do for our country.

As I watched President Biden deliver his inaugural address, I was struck by him and his tone. It strikes me that few people are likely to idealize - or idolize - him.

Yes, to be sure, he made a concerted plea for unity. Arguably, he, in effect, in his own way, called on us as Americans to ask what we can do for our country today.

But President Biden made his appeals to us as Americans without President Kennedy's memorable soaring rhetoric. Nevertheless, President Biden's somber inaugural address is idealistic, to be sure, but arguably not unrealistic. On the contrary, he explicitly adverts to the massive challenges we as a nation face today.

For the text of his inaugural address, see Click Here

In the following annotations in square brackets, I will follow the order of President Biden's sentences in the text of his inaugural address.

Now, following the fourth statement ending with a period, President Biden says, "Through a crucible for the ages [i.e., four long years of President Donald ("Tweety") Trump], America has been tested anew, and America has risen to the challenge [i.e., by voting for President Biden].

"Today, we celebrate the triumph not of a candidate [i.e., of President Biden], but of a cause, the cause of democracy."

But also see my OEN article "Yale's Timothy Snyder on the Trump Terrorists at the Capitol" (dated January 18, 2021):

President Biden says, "And at this hour, my friends, democracy has prevailed [at least momentarily?].