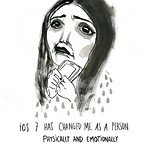 How can I ever escape this stress?
(Image by Chioma Illustration)   Details   DMCA

Robert Jay Lifton's classic study of anti-war Vietnam Veterans, Home From the War: Vietnam Veterans, Neither Victims nor Executioners, (New York: Touchstone-Simon and Schuster, 1973) is a difficult read in its recounting of the war's atrocities and the journey of the veterans that witnessed them and/or carried them out. In the process, the veterans come to terms with their personal psychological disruption, with the nature of the war and, ultimately, with the long history of violence and imperialist aggression of the United States itself.

Lifton identifies three stages in the process of the veterans' coming to terms with the war, their role in it, and the country that sent them there: confrontation, reordering, and renewal. Confrontation involves "awareness of the non-viability"of previously unquestioned inner forms (values, assumptions, symbols) and the possibility"of alternatives." (p. 388) Furthermore, "confrontation involves acknowledging something one dimly knew but kept oneself from consciously recognizing." (p. 389) Reordering "revolves around the struggle to achieve an animating relationship to guilt," (p. 390) that is, a guilt which serves an integrative function. Renewal follows the "psychic work of confrontation and reordering" leading to "a new integrity." (p. 401)

While Lifton focuses on the individual anti-war veteran, he hastens to point out that the war experience affected the whole country, as those of us who lived through those times can well attest, because there was "a functional equilibrium between Vietnam and America, the further merging of counterfeit universes between there and here." (360)

I suggest that the most traumatic aspect of the Trump years for the liberal class has been coming face to face not so much with Trump himself, depraved and obnoxious as he is, but with the fact that his followers and his policies so closely reflect what America is and always has beenself-serving, individualistic, racist, and aggressive, particularly in its pursuit of empire. People like Palestinian writer Susan Abulhawa know this all too well (Donald Trump is the Truest Face of the United States Click Here). But mainstream middle-class liberals, focused as they are on their material and psychological comforts, glibly blame Trump for their discomfort and do not look deeper into America as the anti-war VN veterans in Lifton's study eventually did. Much more comforting to believe the stuff that Barak Obama constantly fed uswe are a nation of laws, we are not that kind of people, voting is the most important thing you can do, etc. etc. Hence their desperation to get back to that world via Joe Biden.

I base this analysis on the predication that humans are not so much rational as rationalizing animals. (Caitlin Johnstone, The Just World Fallacy: Why People Bash Assange And Defend Power Click Here) People want to feel comfortable about what they believe and they tend to believe what makes them comfortable even when reality gets in the way. The traumatic experiences of the anti-war veterans shook them to the point of asking really hard questions about themselves, the war, and America. However, like the majority of today's traumatized-by-Trump Americans, most returning VN veterans just wanted some sense of normalcy rather than deal with their painful wounds. And, indeed, military psychiatrists were on hand to help them "adjust" (p. 414ff) lest they create problems for society. Those who became anti-war activist veterans were only a minority and became so for a variety of reasons (p. 401), but it was not avoidance but rather part of the process of confronting and reordering.

Reordering and renewal are long and difficult processes, but they cannot even begin without first confronting one's present reality and that of the nation. And how much more difficult to do so in the face of establishment politicians and the media assuring us that all is now well as Biden resurrects Obama cabinet retreads in preparation for some serious tinkering at home and the same old neocon aggression abroad. (Caitlin Johnstone, Biden Will Have The Most Diverse, Intersectional Cabinet Of Mass Murderers Ever Assembled, Click Here)

Lifton assesses the reaction of average Americans to the Vietnam war cease fire as "equivocal," "a joyless relief." (p. 445) But for the anti-war veterans who had gone through the intensely personal three stages, there remained the gnawing question of "What now?" Lifton held out hope that the anti-war veteran minority could supply society with "new visions emerging from the wisdom of the survivors" (p. 345) "as opposed to the great majority [of veterans] who are much less clear in their views or the other minority who support the war" (p.19).

I argue that there are some analogies to the post-Trump era. Those like the Squad, who hold genuinely radical views regarding health care, militarism, imperialism, economic equality, racist policing, etc. are most like the anti-war Vietnam veterans. While still a minority, their number surely has grown during the Trump reign. Whether they can point the country in a new direction or whether they will be swallowed up in Biden's quest for "unity" remains to be seen. Those on the radical right, whose irrationality has been stirred up by Trump, are far fewer than the 73 million who merely voted for him; they now await a new zealot to lead them bravely back into the 18th century. I put the vast majority of Democrats along with anti- and ex-Trump Republicans in the category of indulging in equivocal joyless relief. They are happy not to have the Trump realitythe brutal American realityright in their faces every day and are waiting for Biden to comfort them just Carter did after Vietnam and Obama after Bush. But that comfort was short-lived as Reagan followed Carter and Trump followed Obama and the country continues to zigzag to the right in response to the continuous barrage of Americana myth and propaganda peddled by both parties.

While reordering and renewal present great challenges, I maintain that the need for confrontation is the stage where most Americans are stuck. To quote Lifton one more time, "Americans bring desperate, sometimes violent energy to attacking those who challenge that which they already doubt." (p. 325) The America of Biden and Trump is still the America of Johnson and Nixon. The biggest problem the world faces first, last, and always is aggressive, capitalist-imperialist America. Getting past Trump trauma and confronting that reality remains the primary task at hand.

Kosuth was drafted into the Army in January of 1971and spent 18 months learning Vietnamese language and interrogation methods. A week before he was to go to Vietnam his orders were changed and he spent the remainder of his time in the Army at Fort Bragg, NC.

Retired from the University of Wisconsin-Superior. Former director of international programs office and Superior English as a Second Language Institute. Ph.D., University of Minnesota. M.A. degrees in linguistics and East Asian Studies from the (more...)
Related Topic(s): Establishment; Liberals; Trump, Add Tags
Add to My Group(s)
Go To Commenting
The views expressed herein are the sole responsibility of the author and do not necessarily reflect those of this website or its editors.

Obama on Cuba and North Korea--A Lesson in US Politics