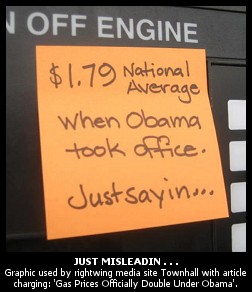 You've heard the Republican meme of the moment. Mitt Romney, the GOP front-runner and presumptive Presidential nominee recently told supporters that the price of gas has "doubled under this president."

Their reliable allies at the fossil-fuel industry-funded astroturf trade group American Energy Alliance have a similar ad, declaring: "Since Obama became president, gas prices have nearly doubled." And, of course, reliable wingnut stooges like Katie Pavlich at the rightwing "news" site Townhall are all too happy to help spread the propaganda on all of their behalves with articles like the one she filed yesterday headlined "Gas Prices Officially Doubled Under Obama."

Of course, it's not actually all that true. Surprised? More accurately, it's an outright lie, since the folks who are pushing it know damned well how intentionally misleading it is. Worse, we've yet to see anyone in the corporate media bothering to correct it.

FACTS: According to the American Automobile Association (AAA), the average price for a regular gallon of gas today across the U.S. is $3.92.

The week that Obama took office in January of 2009, according to the U.S. Energy Information Administration it was $1.83/gallon. But that was just after the price of oil had come crashing down on the global market thanks to the crash of the global economy which led to the Great Recession -- all under the leadership of George W. Bush.

Just months before President Obama took office, and before the crash, in July of 2008, during the Administration of failed former oil man George W. Bush, gas prices had hit their all-time record average high in the U.S. at $4.11/gallon.

Here's what the average price of gas actually looks like in the U.S. from April of 2004 through today, according to GasBuddy.com's data and our own clarity placed over the top [click to enlarge]...

So, yes, strictly speaking the price of a gallon of gas has roughly doubled since Obama took office. That, of course, is barely even half of the story, as you can see above...

The price of gas has, in fact, returned, like the stock market, roughly to its previous levels before the crash -- ya know, back when the George W. Bush administration was looking at companies like Solyndra under its Department of Energy U.S. Loan Guarantee Program. Of course, that loan guarantee was eventually granted to Solyndra by the same Department of Energy after Obama took office and, thanks in no small part to massive subsidies by the Chinese government given to its own solar companies -- subsidies, not loan guarantees, dwarfing the money for U.S. companies and making it nearly impossible to compete -- Solyndra was eventually forced to declare bankruptcy.

But the fact is, Obama's energy policies aren't the cause of rising gas prices any more than Bush's were when they "caused" prices to hit an all-time high on his watch -- an all-time high that both Republicans and their media enablers seem to forget to mention now, just under four years later, in the middle of a Presidential campaign in which the American electorate could really use some facts to help them make their decision.

Thanks to yet another failure of the mainstream corporate media, we suspect few Americans even realize any of this. The exception, of course, is largely the liars and scoundrels who are knowingly propagating the "gas has doubled under Obama!" lie in hopes of playing the American people for suckers. That's what they do. Luckily for those Republicans, the mainstream corporate media seems to be right there to help them.

Brad Friedman publishes Bradblog.com
Related Topic(s): Bush; Energy; Gasoline Prices; Obama; Propaganda; Republican, Add Tags
Add to My Group(s)
Go To Commenting
The views expressed herein are the sole responsibility of the author and do not necessarily reflect those of this website or its editors.