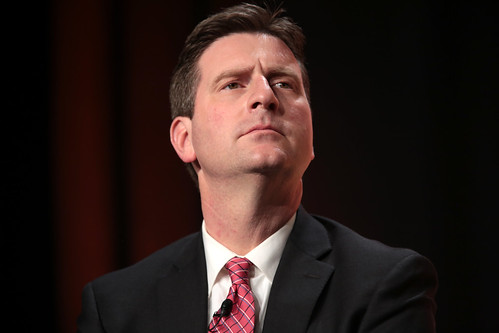 To hold, or not to hold, a Trump rally in Phoenix next Tuesday: that is the question Donald Trump should be asking himself right now.

The Mayor of Phoenix, Arizona, Greg Stanton, (above) has asked President Trump to postpone his campaign-style rally scheduled for the Phoenix Convention Center, on Tuesday, August 22, because "our nation is still healing from the tragic events at Charlottesville."

Trump has said he wants to pardon former Phoenix Sheriff Joe Arpaio. If that is Trump's intention for the Phoenix rally, the Mayor said, "then it will be clear that his true intent is to enflame tensions and further divide our nation."

To hold or not to hold, is the Hamlet-like question Trump must ask himself.

On Wednesday, "A senior Trump campaign adviser told ABC News, "Barring any unforeseen events between now and then, there is no chance we will delay the rally."

There is good reason to assume Trump chose Phoenix for next Tuesday's rally for the sole purpose of enflaming his shrinking base with his pardon announcement.

Trump signaled that intent when he told Fox News in an interview this week that...

...he may pardon former metro Phoenix Sheriff Joe Arpaio, who recently was convicted in federal court for disobeying a judge's order to stop his traffic patrols that targeted immigrants.

A federal judge ruled in 2013 that Arpaio's officers had racially profiled Latinos.

Arpaio, 85, is scheduled to be sentenced Oct. 5, and faces up to six months in jail. Attorneys who have followed the case doubt someone his age would be incarcerated, however.

Mayor Stanton, noting that the site of the rally was "a public facility and open for anyone to rent -- and that includes the Trump campaign," wants the rally canceled.

The Mayor added that if it is held, he is "focused on making sure the event was safe for everyone."

The Trump campaign's announcement that the rally will not be postponed, came a day after Trump drew near universal outcry after saying "both sides" were to blame for a deadly weekend of protests in Charlottesville, Virginia, where white supremacist and neo-Nazi groups clashed with counter protesters.

In Hamlet's soliliquity, he was contemplating his own suicide. It begins:

Related Topic(s): Arpaio; Donald Trump; Phoenix Arizona; Rally; Republican; Sheriff, Add Tags
Add to My Group(s)
Go To Commenting
The views expressed herein are the sole responsibility of the author and do not necessarily reflect those of this website or its editors.