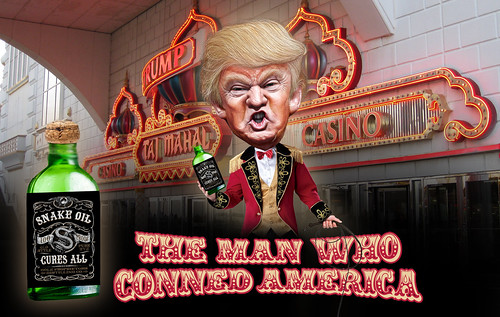 Do you know anyone who might have donated to the "Donald J. Trump Election Defense Fund"?

Well, it probably won't make any difference, but you might want to have a talk with him or her about the contents contained herein.

As Donald Trump has demonstrated day after day the past four years, nothing he does comes without a cost benefit to himself.

He spent his life bilking investors, contractors, and tenants.

Then he decided to try his luck in "reality TV".

When that started going south, he embarked on the biggest publicity stunt of all--running for the nation's highest office.

So it's only natural now he's lost re-election, he is trying to squeeze as much money as he can from his tenacious supporters before moving onto his next scam, possibly his own television network.

Perhaps, though, he doesn't need to venture off into other territory since the Supreme Court has decided politics is a wealthy man's best investment.

So long as he stays out of prison, Trump could literally make a career of living off supporters' largesse.

His legal challenges to steal away Joe Biden's victory may have backfired, but it's not discouraging him from relying on those he has convinced "The Left will try to STEAL this election!"

Hence the "Official Election Defense Fund" inviting supporters to sign up for recurring donations to "protect the results and keep fighting even after Election Day."

How many of those supporters are bothering to scroll down to the fine print, though?

Unless someone gives more than $8,333, 60 percent of one's donation used to go toward Trump's new "Save America" political action committee (PAC), which can be used as a piggy bank for basically anything from donating to other candidates and PACs to paying off debts, of which Trump has $900 million coming due in the next couple of years.

40 percent of a donation used to go to the Republican National Committee (RNC), which can, but is not obligated to, pay for vote re-counts.

Today, though, the figures have changed.