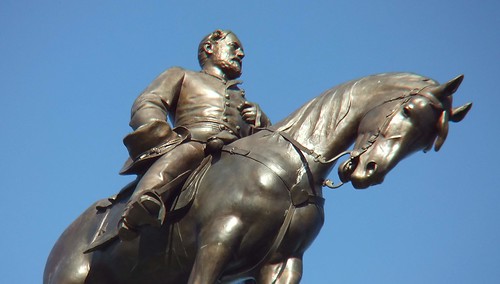 He claims that the lead commander of the Confederate Army, who was indicted for treason after the war, but who, along with other leaders of the Confederate rebellion against the United States escaped facing trial because of the intervention of President Ulysses S. Grant, and that it was an appropriate decision because Lee was no traitor, merely a Virginia patriot, and in any event was a Union soldier and then Confederate soldier he never been a slave-owner or supporter of slavery. He says the only time Lee actually owned or was responsible for owning slaves was when he inherited his father's plantation which had 200 slaves which the will stated were to be freed.

Roberts claims Lee, before the Civil War even happened, "took a two-year leave" from the US military to settle the estate during which time he freed all his inherited slaves. As well,

However, accordiing to the Encyclopedia Virginia, the reality is that after his father died, "Robert E. Lee, as executor of his estate, was responsible for manumitting them within five years. He was widely criticized for takiing the full five years."

As well, the encyclopedia entry notes that far from opposing slavery, as some of his modern defenders claim, "During both the Maryland (18620 and Gettysburg (1863) campaigns, Lee's officers kidnapped free blacks and sold them into slavery." Other accounts also state that black Union soldiers captured by Lee's army were brutally killed, sometimes after first being paraded in front of Southern crowds to be spat on and abused, instead of being imprisoned as with white Union captives. In a prisoner exchange arranged with Gen. Grant, Lee refused to return black soldiers, which he referred to as "property" of the Confederacy.

It should be noted, but Roberts pointedly did not, that many of Lee's descendants oppose his posthumous deification as a good guy.

If you want to know Lee's real thinking about the institution of slavery, read this letter he wrote in 1856:

"I think it however a greater evil to the white man than to the black race, & while my feelings are strongly enlisted in behalf of the latter, my sympathies are more strong for the former. The blacks are immeasurably better off here than in Africa, morally, socially & physically. The painful discipline they are undergoing, is necessary for their instruction as a race, & I hope will prepare & lead them to better things. How long their subjugation may be necessary is known & ordered by a wise Merciful Providence. Their emancipation will sooner result from the mild & melting influence of Christianity, than the storms & tempests of fiery Controversy."

Roberts doesn't mention in his effort to argue that the secession of the Southern states was not a civil war, but simply an assertion of "states' rights" -- the basic argument of a recidivist and revisionary history popular today in the south among white supremacists -- that many of Lee's own descendants think he should not be celebrated or lionized as some virtuous man. This

As the Rev. Robert Lee, a namesake and great-great-great-great nephew of the Conferacy's top general stated in a video critical of Trump's response to the Charlottesville alt-right violence:

Related Topic(s): History US Civil War; Paul Craig Roberts; Robert E Lee; Slavery, Add Tags
Add to My Group(s)
Go To Commenting
The views expressed herein are the sole responsibility of the author and do not necessarily reflect those of this website or its editors.