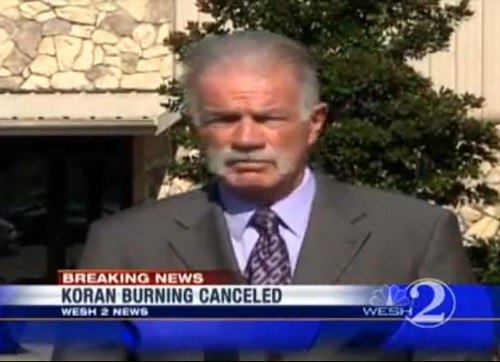 UPDATE: Pastor Terry Jones has not said whether he will not burn Korans or not. It appears he will not be burning the books on September 11th. But, he has told some media outlets the burning is "on hold" because he contends Imam Rauf through Imam Musri told him they would be open to moving the Park51 Project to a new location and that's one thing that the voices inside his head thought would be a good reason to cancel the burning. Imam Rauf denies ever making any agreement like that and it seems that only in the past hours was a meeting between Imam Rauf and Pastor Jones planned.

The conservative media has especially seized on this and are comparing the Koran burning to the building of a mosque at Ground Zero and tying Imam Rauf to all this activity. It now appears the right wing that has been promoting Islamophobia will exploit Jones' now-called off Koran burning and work to make it seem like Dr. Jones was "sensitive" so why can't Imam Rauf be "sensitive" too.

Above all, this development really leads me to believe that the combined pressure of federal and municipal authorities led Dr. Jones to back down and this awkward press conference with Imam Musri was all about saving face and not admitting his church (and God) would not be able to help him pay for the security costs of International Burn-a-Koran Day, which they were going to be held accountable (and may still be asked to pay).

A religious soap opera is unfolding before the world's eyes. Dr. Terry Jones, the noxious pastor from Gainesville, Florida who had planned the festive International Burn-A-Koran Day for September 11th, has called off the book burning event, according to news sources like USA Today. Imam Muhammed Musri apparently offered Dr. Jones a deal if he would back down.

It's being reported that Dr. Jones has canceled "the planned burning of the Qurans" and is "instead flying to New York on Saturday to meet with Imam Feisal Abdul Rauf, the man behind the planned New York mosque" because Imam Rauf may decide to build the Park51 Project somewhere else. But, the problem is the deal being reported has not been made. Imam Rauf is denying a deal has been made and he put out the following statement:

"I am glad that Pastor Jones has decided not to burn any Korans. However, I have not spoken to Pastor Jones or Imam Musri. I am surprised by their announcement. We are not going to toy with our religion or any other, nor are we going to barter. We are here to extend our hands and build peace and harmony."

Imam Rauf says he has not talked to Dr. Jones or Imam Musri.

Two theories: (1) Imam Musri said something that convinced Dr. Jones to go on a trip to meet with Imam Rauf, never said Imam Rauf would move the mosque, and Pastor Jones being thick-headed misunderstood Imam Musri so he said at the press conference the mosque was going to be moved. Or, (2) Imam Musri and Imam Rauf duped Dr. Jones into backing down.

Whatever the case may be, the freakout over at JihadWatch.org reveals how much members of the anti-Islam movement were looking forward to the burning even though they claim it was an unwise or tactically bad move. Some examples:

We are being had. Jones was threatened. Rauf has no intention of moving that mosque. What the hell is going on? -lilredbird, September 9, 2010 2:35 PM

"Jones said Imam Muhammad Musri of the Islamic Society of Central Florida told him that officials would guarantee that the mosque would be moved."

WHO is Imam Muhammad Musri, of Central Florida, and what does he have to do with Rauf or Cordoba? Can he speak on behalf of, or make decisions for, Rauf?? - Eleano, September 9, 2010 2:39 PM

Kevin Gosztola is managing editor of Shadowproof Press. He also produces and co-hosts the weekly podcast, "Unauthorized Disclosure." He was an editor for OpEdNews.com
Related Topic(s): American Muslims; Anti-Muslim; Christianity; Feisal Abdul Rauf; Ground Zero Mosque; Islam; Islam Muslim; Koran; Muslim World; Park51; (more...) Quran; Religion; Terry Jones, Add Tags  (less...)
Add to My Group(s)
Go To Commenting
The views expressed herein are the sole responsibility of the author and do not necessarily reflect those of this website or its editors.