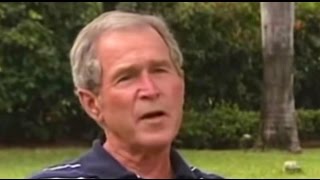 With a bitterly divided nation facing a constitutional crisis of epic proportion, as President Trump stands on the brink of repeating the Saturday Night Massacre of Richard Nixon, with liberal democracy under attack from a hostile foreign power that seeks to elect our presidents through covert action, every living former president should come together to release a joint statement in defense of the integrity of the Department of Justice and special counsel Robert Mueller.

Addressing a George W. Bush Institute event in October in New York, former President George W. Bush, who I never supported throughout his public life, gave one of the most profound and important speeches in modern American history.

Without naming the current occupant of the White House, President Bush offered a sweeping and powerful critique of the Trump presidency and championed core values of freedom, democracy and human rights that have united Americans since 1776. That speech, on that day, on those matters, could have been given by presidents named Jefferson and Adams, or Kennedy and Reagan.

As the current occupant of the Oval Office refuses to unequivocally condemn the attack against our democracy by a successor to Soviet dictators, and falsely accuses whose who lead investigations of that crime of attacking our democracy, Bush in his speech warned against foreign aggression -- including cyberattacks, disinformation and financial influence -- that attacks our democracy and subverts our elections.

Bush, in his speech, condemned a political discourse of casual cruelty that has often taken hold in our democracy, and a politics of bullying and prejudice that emboldens bigotry and bitterly divides a citizenry whose heirs are Thomas Jefferson, James Madison and Martin Luther King Jr. in a nation where people of every race, religion and ethnicity should be universally respected as fully and equally American.

Every living former president should join together in a united statement that upholds these values that are as old as the Declaration of Independence, and as young as Martin Luther King Jr.'s granddaughter telling a rally of students in Washington that her dream is to be part of the next great generation that makes life safe for our children in our schools.

Bush spoke of the Prague Charter, signed by believers in human rights and freedom such as Vaclav Havel and Natan Sharansky, who risked their lives for a worldwide cause that is under attack today and knows no limit of borders or time. Whatever their other differences, all living former presidents should join together to reiterate their unyielding faith in this timeless cause.

Today, American democracy is under attack from a hostile foreign power. Those who seek to investigate and defeat this crime are under attack from the current occupant of the Oval Office who treats the administration of justice as a weapon to wield against political opponents and has fired, threatened or condemned leaders of investigations seeking to protect and defend America against this crime.

Bush warned in his speech that our politics have become vulnerable to conspiracy theories and outright fabrication. When the current occupant of the White House says bad blood with Russia is caused by fake news and a corrupt Russia investigation headed up by Democratic loyalists, he is lying. If he fires those leading the investigations, he will rip the country apart and create the greatest constitutional crisis since the Civil War.

Every living former president should rise together to warn in a loud, clear and unified voice that the investigation of the crimes against our democracy must remain intact, unimpeded and unobstructed.

Whatever my past disagreements with him, when Bush gave his speech in New York he was speaking great truths in his finest hour.

As the current occupant of the Oval Office stands on the brink of historically disastrous actions that would do great damage to America, all living former presidents should speak out loudly and clearly together, as one, which would be one of America's finest hours

Related Topic(s): Living Presidents; Respect Rally; Trump Crime; Trump Presidency, Add Tags
Add to My Group(s)
Go To Commenting
The views expressed herein are the sole responsibility of the author and do not necessarily reflect those of this website or its editors.