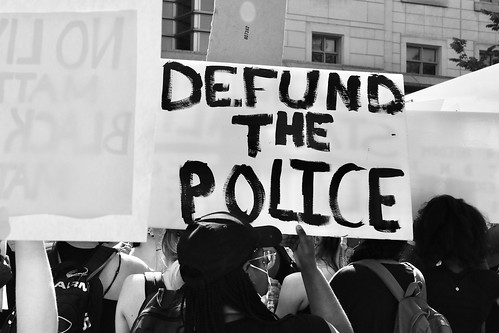 Defund Police. Invest in Black Lives. What just weeks ago was a slogan is fast becoming law.

In just the last week, the Minneapolis school board resolved to cut their contract with city police in the schools. The mayor of Los Angeles announced that his city was considering cutting the city's police budget by some $150 million. Now, Minneapolis City Council has voted with a veto-proof majority to replace law enforcement with a "transformative new model of public safety."

Change is coming fast, and much of the media would have you believe it's as if by magic. But if it is magic, it's movement magic. Peek beneath the pull-quotes and you'll find work that has often felt long and slow.

Take one example. This week, The Laura Flanders Show reported on Newark, New Jersey, one of the big US cities that saw tremendous demonstrations against police racism in the wake of the murder of George Floyd.

In 1967, Newark erupted in flames after the police beating of a black man in detention and the shooting death of a woman, Rebecca Brown, in her own home after troopers and members of the national guard opened fire.

This time around, thousands turned out to protest in Newark, but no one was arrested and there was minimal property damage. Why? It's a 50-year story we begin to tell in this week's episode, but fast-forward to now, and you see a city that's embracing a new approach to public safety led by its leaders, funded by its council and implemented and informed by the city's residents themselves.

Change has been long in coming. Even before the rebellions of the 60s, people like Newark poet and activist Amiri Baraka were demanding a civilian review board, but they were blocked by the force and the police union. Numerous inquiries, reports and black appointments later, it took the election of Baraka's son Ras to get one approved.

Baraka convened a community council and brought in Aqeela Sherrills, a peace maker from Watts, to head up the Newark Community Street Team. Today, the Street Team doesn't just demand change from the police, it helps train them, and alongside the mayor's office, the department of health and the office of public safety, they look at violence as a public health issue with roots in redlining, deindustrialization, environmental racism, austerity, misogyny and centuries of white impunity and black trauma.

When Covid-19 hit, Sherrills and his team were declared essential workers. Some 50-strong, the members were out with their neighbors, not just at the demonstrations, but day after day, all year. "This is an inflection point," Aqeela Sherrills told me this week.

A long overdue paradigm shift is happening. But paradigms take years of pushing. Extraordinary and all-important as these days are, don't let anyone tell you the work is done.

Related Topic(s): Demonstrations; Murder; Police; Racism; Take A Stand For Peace, Add Tags
Add to My Group(s)
Go To Commenting
The views expressed herein are the sole responsibility of the author and do not necessarily reflect those of this website or its editors.