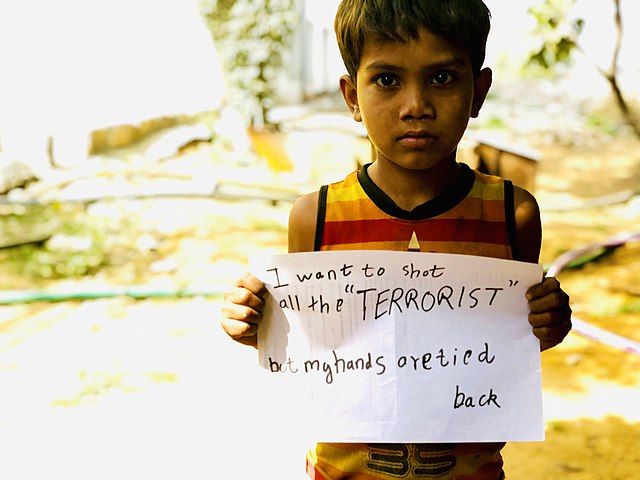 Anger of indians in the wake of Jaish-e-Muhammad suicide terrorist attack that killed forty para military personnel at Pulwama
(Image by (From Wikimedia) Premchander8, Author: Premchander8)   Details   Source   DMCA
India's 'surgical strike' inside Pakistani territory in September 2016, as also the latest Feb 25, 2019 strike on militant training camp at Balakot sits at odds with the non-stop provocation from across the border which continues in various forms, the latest being the Feb 14 attack of Jaish-Muhammad (JeM) near Pulwama that had claimed 40 lives of paramilitary soldiers. Any reasonable guess? Well, it could be because there has been no forceful riposte from India. Also because of a conviction that India's response if any will always be meek. More over the bankrupt state badly needs to divert the domestic attention.

From what is in public domain in Islamabad, Pakistan is preparing a blueprint for a bigger offensive against India militarily and diplomatically. Also through state-sponsored terrorism. The Pakistani provocations will not be limited to Kashmir theatre.

Pakistan backed radical Khalistanis and Kashmiris in Europe and the US routinely stage anti-India protests, burn the Indian tricolor and stamp over it outside Indian missions. Pakistan's interference in India's domestic issues has been increasing. A US intelligence report speaks of chances of communal violence in India in the coming months, aided and abetted by Pakistan.

Nearly four years ago, Indian Prime Minister, Narendra Modi, created a stir by publically siding with the oppressed people of Balochistan. Before Modi, the Government of India had always been shy of speaking up for Baloch people's struggle against Pakistani bondage. Silence may be justified as a strategy but not when the need is to tell Pakistan loudly that India will provide Balochistan the kind of help that it provides to Kashmiri separatists. The situation is for a tit for tat proposition. Nothing more, nothing less. It is the only language Pakistan's deep state and its accomplice in the civilian theatre understand. The Balochi nationalists should be encouraged to visit India; they should be speaking up regularly in all foreign capitals to debunk Pakistani narrative.

Two recent incidents showcase India's unfriendly neighbor's intentions. One, of course, is Prime Minister Imran Khan's efforts to exploit the Kartarpur corridor to project himself as the sole peacenik in nuclearised South Asia. Kartarpur Gurudwara has been built in memory of Guru Nanak, the founder of Sikhism who lived at Kartarpur. It is just a few kilometers from the Indian border or what is known as Radcliffe Line. As Prime Minister Modi said it is unfortunate that Kartarpur went to the other side of the border after Pakistan was carved out of British India. That is not the issue.

The issue is Pakistan's refusal to allow Hindus from India to visit Kartarpur shrine. Hindus regularly visit Gurudwaras in India and in Pakistan as well. Why not allow them to pay their obeisance at Kartarpur? No rational explanation has been offered for the denial. Yet, Imran Khan is going around accusing that India has been turning down his efforts at establishing peaceful relations. It is as though Pakistan seeks peace and India wants war! Close observers of Pakistan scene have a different stake. In their opinion, which has takers by the dozen, the whiplashing of India is with a purpose - divert attention from the horrible mess the Pak economy is in despite generous dole out of dollars by Saudi Arabia and China.

Shah Mohammad Qureshi is no less active in furthering the anti-India agenda of Imran Khan Government. The irksome Pakistani foreign minister rings up separatist, pro-Pakistan leaders in Srinagar. He knows fully well that his call will not go down well with India. What could be his precise intention? May be an effort to needle India and to show to the world that Delhi will do no more than twiddle its thumb. Well, it is brazenness of the worst kind.

Islamabad and Rawalpindi were irritated when in protest the Indian foreign secretary summoned the Pakistani high commissioner in Delhi one day at 10.30 p.m. But in no way can it be construed as a stern warning which Pakistan will ignore at its own peril.

For the Pakistani envoy in India-a contender for the coveted post of foreign secretary of his country ( he has since been recalled for consultations) -it might have been a minor inconvenience to drive up to South Block from his Tilak Road residence at that hour even though the distance covered was small. But it is nothing compared to the uncouth ways in which the Pakistani sleuths treat members of the Indian mission in Islamabad.

Tailing them regularly has been a routine for decades. On occasions, the sleuths resort to physical assault on Indian diplomats and their families, women and children including. Breaking into their homes at night or ringing door bells at odd hours has become a regular suffering for Indian diplomats in that land of the pure. A somewhat new development has been cutting off electricity and gas connections of the Indian mission and its members.

When a Pakistani employee of its mission in Delhi (not a diplomat) was found molesting a woman in a local (Delhi) market and taken for questioning, all hell broke loose in Pakistan; the Indians in Islamabad had to face retaliatory action with a warning of more severe forms of action. Pakistan also derives pleasure by denying membership to Indian diplomats of clubs frequented by the diplomatic community in the puritan capital of the Islamic Republic.

The India-Pakistan ties have been virtually in a limbo for a long while. As a longtime observer of India-Pak tango, I find the prospects of an upturn bleak. Certainly after Imran Khan and his Army Chief Gen Bajwa have told their forces on the border to "Hit India hard"! There is a caveat, and it is to act if India acts. May be it was because the Pakistani generals have never win an actual war, and because they have been content with using the jihadi proxies against India and Afghanistan to achieve their strategic goals.

Whatever be the chest thumping on the Indian streets, the Modi government has not reacted to the war cries from Pak capital. In fact, India's only comment till-date to the deadliest suicide bombing at Pulwama is the assertion that the terrorist perpetrators would not go unpunished. The assertion reflects the resolve of a nation to end the scourge of militancy of any hues. It does not signal the beat of war drums.

It is not rocket science to know that the perpetrators of Pulwama attack were Pakistani Islamists, who enjoy official patronage. Anyhow, the Bahawalpur based Jaish-e-Mohammad has left no trace of doubt by taking full responsibility within minutes after the attack. It even released a video in support. It is natural therefore to expect Pakistan to act against JeM. Yet, Imran Khan has asked India to provide actionable intelligence to catch Pulwama perpetrators. Clearly, a manifestation of an unwillingness to act against the state assets in the proxy war.

A blogger since July 2008 James Duglous Crickton is a London based consultant working with a consultancy firm focusing on Asia, particularly South Asia and East Asia. Political Research is his functional focus area. While his interests are (more...)
Related Topic(s): Balochistan; Bombing; Diplomats; Generals; Intelligence; Militancy; Pakistan Nuclear Program; Pakistan Tehreek Insaf; Pakistan War; Pakistani Taliban; (more...) Paramilitary; Perpetrators; Provocation; Suicide, Add Tags  (less...)
Add to My Group(s)
Go To Commenting
The views expressed herein are the sole responsibility of the author and do not necessarily reflect those of this website or its editors.