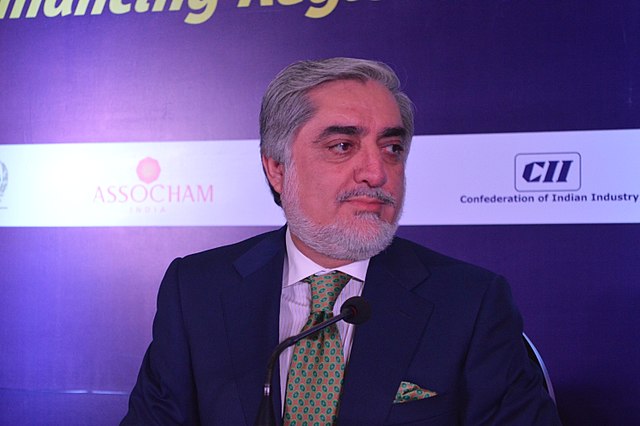 Afghanistan's Chief Executive Officer, CEO, Dr. Abdullah Abdullah
(Image by (From Wikimedia) Hariva, Author: Hariva)   Details   Source   DMCA
In this context, what is the role that Dr. Abdullah is playing in the NUG? This is perhaps the question that Atta Noor is asking from a JeI perspective as well. The JeI says that Dr. Abdullah has not done enough for the party meaning thereby that he is not fulfilling the promises made under the NUG. Put differently the JeI charge is that the CEO is acting on his own to the discomfort of the party. Well, Abdullah was willing to be extremely critical of President Ghani in 2016. But today he is aware that as CEO he does not actually wield any power and he is comfortable with what the reality. His position can be formalized if there is a Loya Jirga and if it could recommend creation of the post of Prime Minister constitutionally.

The other possibility is that Abdullah becomes President of Afghanistan in the 2019 elections. For this he would have to be nominated by the JeI as its candidate, something the party at this juncture doesn't appear to be in a mood to do so. The JeI wants Atta Noor to be its candidate.

Fundamental to the present struggle within the NUG is also a struggle within the JeI as to who will head the party. Each politician, be it Atta Noor, Salahuddin Rabbani or Dr. Abdullah claim to hold a high position in the party, but the issue of who is actually in command remains moot. Noor, for instance, heads the party's Executive Council, while Rabbani is the head of the party.

The position of JeI head has been transitional since the assassination of the party's founding leader, Burhanuddin Rabbani in 2011. JeI has been since that time led by his son, Salahuddin Rabbani, who is currently acting Foreign Minister also. When Salahuddin took the position in October 2011, it was supposed to only be for a period of two months, after which, as per the party's constitution, a regular Congress was to be convened to choose its permanent leadership. This has never happened and each time it was proposed, it has been rescheduled for various reasons. In 2013, it was decided to hold the party conclave "after the 2014 Presidential election", but the Congress is yet to take place.

From 2016 onwards, Atta Noor has pushed the JeI to re-negotiate the terms of the NUG to try and gain more power for the party. The rank and file also supported his efforts to renegotiate his own position as Governor of Balkh with President Ghani. Eventually, Noor managed to convince Ghani that he was better placed to function as a full-time Governor of the Province as opposed to being an 'acting' governor, something that Ghani had announced on assuming office in 2014; all Governors would be acting till further orders.

Although the JeI is supportive of Atta, there is internal resistance to his ambitions of becoming leader of the party and to some extent to his running for Presidency. The JeI leadership council has the authority to convene the Party Congress and choose a new leader. It is clear that many party members remain doubtful about Atta Noor and are therefore, opposing convening of the Congress.

Frankly, the tussle between Atta Noor and the Central government is not unique. Afghanistan has witnessed provincial and inter-personal struggles for power endlessly. Last year, for instance, Balkh saw a violent feud break out between Governor Atta Noor and a provincial councilman Asif Mohmand, when Noor sent gunmen and police officers to arrest the latter. Mohmand, who enjoys the support from the Hizb-e-Islami party, engaged in a shoot-out with Noor's men resulting in the death of two men and injuries to seventeen. The short point is that potential for trouble exists very clearly and any attempt by President Ghani to forcibly ensure the exit of Governor Noor is likely to be resisted by force.

Admittedly, greater importance in the current context are the differences between Noor and Abdullah. As pointed out at the outset, Noor supported Abdullah to power in 2014 with his influence and money in Balkh. However, Abdullah's chosen path as CEO clearly demonstrates that power corrupts and corrupts absolutely. The same goes for every other warlord in Afghanistan including Noor. That said, it must be recalled that Noor claimed in early 2017 that the party had taken away the responsibilities of Abdullah within the JeI and reassigned them to another office holder.

At the end of the day, Abdullah knows that he is today an international figure, and one who has US backing. That is what is keeping him from openly courting trouble within the JeI and by extension in the NUG. However, his position remains tenuous for both the party and the President. When push comes to shove, will Abdullah abandon the JeI and join hands with Ghani for his political survival? Does that also extend to not having elections this year as planned or will that be a casualty of the violence that is racking Afghanistan today?

After all, it does appear that the US under President Trump would be quite happy to have President Ghani continue in office and if that means not holding elections in 2019, it would be only natural for Dr. Abdullah to bargain that he should be made Prime Minister! That of course gets one into the realm of speculation and of that there is no end in Kabul as we enter another fighting Taliban season. What tomorrow will bring to Afghanistan, one can only guess. In the present circumstances, only chaos!!

A blogger since July 2008 James Duglous Crickton is a London based consultant working with a consultancy firm focusing on Asia, particularly South Asia and East Asia. Political Research is his functional focus area. While his interests are (more...)
Related Topic(s): Afghanistan Drawdown; Afghanistan War; Afghanistan Warlords; Election; Elections; Gunmen; Jirga; Parliament; Power; Taliban; (more...) Taliban; Taliban; Violence, Add Tags  (less...)
Add to My Group(s)
Go To Commenting
The views expressed herein are the sole responsibility of the author and do not necessarily reflect those of this website or its editors.