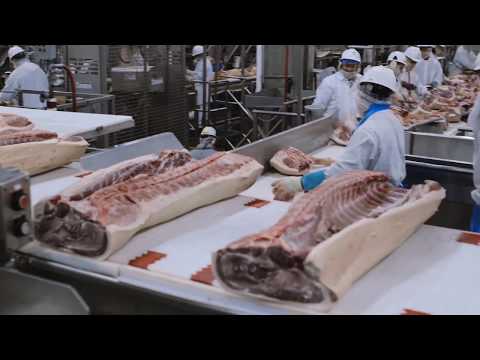 Some businesses make us feel all warm and cuddly. Like bakeries. Who can resist smiling just thinking about the smell of newly baked bread? But other businesses like meatpacking we do our best to ignore. Who wants to think about blood and guts and squealing pigs?

But think we must. Unsavory enterprises can reveal basic truths about our times we'd rather not consider.

Back in the early 20th century, for instance, a young writer forced Americans to confront inconvenient truth with a blockbuster novel about the meatpacking industry. Upton Sinclair's The Jungle detailed slaughterhouse horrors that endangered workers and consumers alike. The resulting public outrage would inspire the legislation that created what became the federal Food and Drug Administration.

Meatpacking, Americans came to realize generations ago, needed government oversight. We could not trust the moguls who ran the industry to do the right thing. Indeed, we could not trust any moguls. Their business empires needed to be regulated and broken up, their incomes taxed, their power curtailed.

Over the past 50 years, Americans have unlearned all those lessons. Now we face meatpacking empires bigger than any Upton Sinclair ever contemplated. More powerful, too. Our modern-day emperors of meat, pork, and poultry now have enough might to imperil the lives of their workers with a president of the United States cheering them on.

President Donald Trump actually did more than cheer earlier this week. He issued an executive order that prevents state and local governments from shutting down meatpacking plants that are infecting workers and through them their neighbors by the thousands.

Trump's order came after meatpacking executives like Smithfield Foods CEO Kenneth Sullivan pronounced that slaughterhouse shutdowns are "pushing our country perilously close to the edge in terms of our meat supply."

Some state officials have been reinforcing this impending-dinner-disaster line by threatening meatpacking workers inclined not to work in infectious environments. Iowa governor Kim Reynolds has announced that her state will be treating worried employees who don't show up at operating plants as "voluntary quits" ineligible for unemployment benefits.

Related Topic(s): Cattle; Coronavirus; Slaughterhouse; Trump; Upton Sinclair; Workers, Add Tags
Add to My Group(s)
Go To Commenting
The views expressed herein are the sole responsibility of the author and do not necessarily reflect those of this website or its editors.