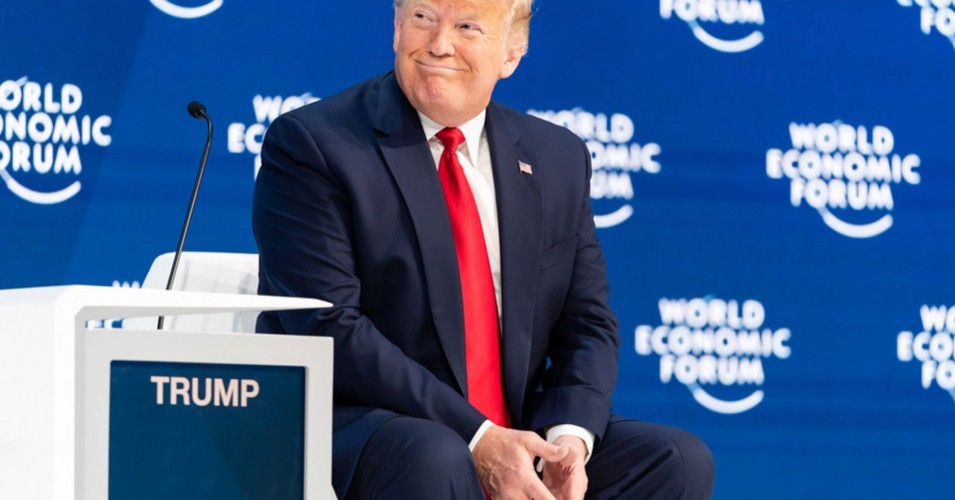 The biggest surprise up in the Swiss Alps last week at the Davos World Economic Forum? Reporters who cover this annual global bacchanal of billionaires are marveling at the warm and friendly reception that has greeted Donald Trump. The world's deepest pockets have wined and dined with the U.S. president, laughed at his quips, and profusely fed his ego.

And Trump loves the Davos deep pockets back, at one point hailing the big-time corporate CEOs gathered around him as "the greatest businessmen in the world."

Quite a difference from Trump's first Davos visit. In 2018, he encountered a distinctly uneasy assemblage of the excessively rich. Would this "America First" president set off an international trade war? Would he trash their elite status? Would he screw up the good thing they had going? The corporate execs and political heavyweights gathered at Davos two years ago didn't quite know what to expect.

Today, two years later, that discomfort has disappeared. "Davos Man" likes what Donald Trump has delivered. Klaus Schwab, the founder of the Davos World Economic Forum, made all that clear when he took the stage with the president on the confab's 50th opening day. Schwab lauded Trump "for injecting optimism" into the global political and economic discourse.

"We have many problems in the world," pronounced the grand old man of Davos, "but we need dreams."

In his 30-minute Davos keynote address, the president would do more crowing than dreaming. His administration, he declared, had created a "roaring geyser of opportunity." The United States is enjoying "an economic boom the likes of which the world has never seen before." Trump even declared victory over inequality.

"For the first time in decades, we are no longer simply concentrating wealth in the hands of a few," he announced. "We're concentrating and creating the most inclusive economy ever to exist."

"There are lot of masters of the universe who think he may not be their cup of tea, but he's been a godsend," explained Ian Bremmer, a mover and shaker behind the Eurasia Group business consultancy.

A godsend who's cut taxes and regulations and made making money ever easier for people who already have plenty of it. And that nastiness about trade wars? Trump's offensive against "free trade," notes This Week's Jeff Spross, has boiled down to "essentially a showman's wrestling match, a slugfest devoid of policy substance, far too shallow to have any concrete chance of rebalancing the money flows and scales of power" that align against working people.

The Davos annual get-together with its $10,000 hotel rooms and $43 hotdogs has always served as a reminder of the vast and growing divide that separates the world's richest and most powerful from the rest of us. But this year's gathering seems to be rubbing that reminder in.

Davos applauds while Donald Trump celebrates a "roaring geyser of opportunity." But in the United States and most of the rest of the world, few people are feeling any spray from a "roaring geyser." How few? One answer from the global research firm Edelman Intelligence came just before this year's Davos celebration opened.

Edelman last fall surveyed over 34,000 respondents across the world and found a "growing sense of inequity." In developed nations, details a new Edelman report, less than a third of families see themselves as better off five years from now. Over three-quarters see elites "getting richer while regular people struggle to pay their bills."

Related Topic(s): Billionaires; Davos; Davos Economic Forum; Millionaires; Taxes; Trump; Trump Cruelty; Trump Selfishness, Add Tags
Add to My Group(s)
Go To Commenting
The views expressed herein are the sole responsibility of the author and do not necessarily reflect those of this website or its editors.