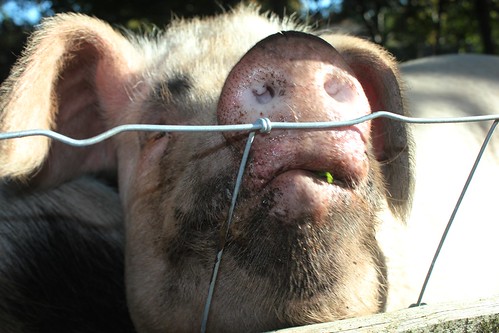 This is my message to you, comrades: Rebellion!

The book has been chosen as a feature of the Book of the Month Club. It's September 1946, and the critic is baffled by the announcement.

How is it possible, he asks, that such a book is heralded as something worthwhile to read? The "unusual talent" of the writer is rare. Rarer, still, is the "recognition" he'll receive as well as "a great tangible reward."

But for this book?

" There are times when a reviewer is happy to report that a book is bad because it fulfills his hope that the writer will expose himself in a way that permits a long deserved castigation," writes the New Republic critic, George Soule. But this isn't the case with George Orwell.

Animal Farm "puzzled and saddened me."

It's obviously an allegory, a satire, yet nothing more than "a creaking machine for saying in a clumsy way things that have been said better directly." As much as he admires Orwell, he can't recommend that anyone read a book that seems to miss the boat.

The writer's display of knowledge about the behavior of farm animals is dwarfed by the way the animals move about as if "circus animals performing mechanically to the crack of the story-teller's whip."

Maybe it's too soon after those recent historical events in Russia that Orwell struggles to represent in Animal Farm. There's Major, the pig, who prophesies the revolution to come. "All men are enemies. All animals are comrades." Yes, we get it!

The reader, too, is to recognize in Napoleon, also a pig, Lenin. Snowball, another pig, is Trotsky. The building of the windmill is "an obvious symbol for electrification and industrialization." That is, a Lenin project.

Related Topic(s): Democratic; Equal; Lies; MEMORY; Orwellian; Pandemic; Population; Reality; Rebellion; Revolution; (more...) Sacrifice; Slavery; Suffering; Work; Writing, Add Tags  (less...)
Add to My Group(s)
Go To Commenting
The views expressed herein are the sole responsibility of the author and do not necessarily reflect those of this website or its editors.