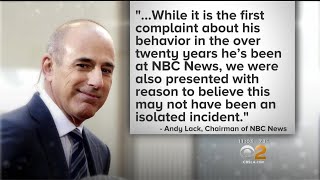 As the campaign over allegations of sexual misconduct has unfolded, it has become clear that what is involved is of far greater magnitude than the form in which it initially emerged -- allegations against one Hollywood producer, Harvey Weinstein. With the initial shock beginning to wane, opposition is emerging from some of those targeted.

Public Broadcasting Service (PBS) personality Tavis Smiley, who was summarily suspended Wednesday based on anonymous and unspecified allegations, issued a blistering statement denouncing PBS for launching a "so-called investigation" without even contacting him. After Smiley caught wind of the inquiry through worried calls from friends who had been questioned, he threatened a lawsuit to demand that he be given an opportunity to answer the accusations.

"If having a consensual relationship with a colleague years ago is the stuff that leads to this kind of public humiliation and personal destruction, heaven help us," Smiley wrote. "PBS investigators refused to review any of my personal documentation, refused to provide me the names of any accusers, refused to speak to my current staff, and refused to provide me any semblance of due process to defend myself against allegations from unknown sources."

"This has gone too far," he concluded. "And I, for one, intend to fight back."

Ignoring Smiley's democratic rights, Mills Entertainment announced yesterday that it was canceling its backing for his upcoming 40-city theatrical dramatization of the last year of the life of Martin Luther King Jr. -- who was himself the target of an FBI-orchestrated campaign over "unnatural" and "abnormal" sexual behavior.

Smiley's statement came only a few days after Australian actor Geoffrey Rush, the target of a campaign by Rupert Murdoch's Daily Telegraph smearing him as a "sexual predator," announced that he is filing a lawsuit against the newspaper to "redress the slurs, innuendo and hyperbole they have created around my standing." He added, "The situation is intolerable and I must now seek vindication of my good name through the courts."

Despite these signs of opposition, the campaign is metastasizing to implicate an ever-expanding array of individuals and actions. On Friday, the first woman to be targeted, Kansas Democrat Andrea Ramsey, announced that she was ending her campaign for Congress. Local media reported that the company for which she worked had settled a lawsuit filed by a former male employee who accused Ramsey of firing him after he rejected her sexual advances. The Democratic Party leadership cut off support for Ramsey after reports of the accusations, which Ramsey asserts are lies.

Under the blanket category of "sexual harassment," an extremely broad range of activity, including that which falls under the framework of normal interpersonal relations, is effectively being criminalized and associated with the horrific crime of rape. The effect is to create a situation where virtually anyone can be singled out and smeared with the charge of being a "sexual predator."

Parallel efforts are being made to incorporate these conceptions into law. In a letter this week to the New York Times, Carmelyn Malalis, the chairwoman of the New York City Commission on Human Rights, approvingly cited laws in New York City that include in the definition of harassment anything that rises above "petty slights and trivial inconveniences," meaning, in Malalis's words, "any unwanted sexual behavior, including sexual comments or jokes, gestures, touching, texts or emails that create a hostile work environment."

This means that misinterpreted word or gesture can result in being fired and blacklisted. This goes a long way in drastically undermining the First Amendment protection of free speech.

From the beginning of the Trump presidency, the Democrats have sought to channel popular opposition to the administration behind a right-wing agenda based on the demands of powerful factions of the military-intelligence apparatus. Hence the campaign over "fake news," Russian hacking, and now sexual harassment.

Thomas Edsall, in a column published this week ("The Politics of #HimToo"), acknowledges that the campaign is largely driven by political considerations. The column is all the more significant given that it appears in the New York Times, the leading voice in pursuing the sexual witch hunt.

"The issue of sexual misconduct has emerged as a centerpiece of Democratic strategy for taking on President Trump and the Republican Party," Edsall writes. "For Democrats, who have struggled to find traction in their battles with the administration, the explosion of allegations has created an opening to put the focus on Trump -- a development greatly enhanced by the Moore debacle." The latter is a reference to the defeat of the fascistic Republican Roy Moore by right-wing Democrat Doug Jones in this week's election to the US Senate in Alabama.

Earlier this month, leading Democrats, including House Minority Leader Nancy Pelosi, opposed a motion to impeach Trump that was based on his fascistic and racist policies. Now, however, according to a separate article in the Times, "Ms. Pelosi has strongly endorsed the push for new hearings on the sexual misconduct complaints against the president."

Related Topic(s): Harassment; Opposition; Sexual Harassment, Add Tags
Add to My Group(s)
Go To Commenting
The views expressed herein are the sole responsibility of the author and do not necessarily reflect those of this website or its editors.