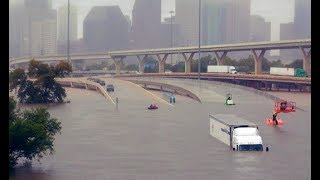 Hurricane Harvey made landfall in the United States in late August of this year, killing at least 90 people and devastating much of the region around Houston, Texas. Three months later, tens of thousands of people are homeless, home construction has hardly begun and the long-term health consequences of the disaster have yet to be tallied.

By some measures, Harvey is the worst natural disaster in the history of the United States, with estimated costs of nearly $200 billion, including flood damage to more than 300,000 homes. It was followed in September by Hurricane Irma, which struck the Caribbean and Florida, and Hurricane Maria, which destroyed much of the infrastructure and housing stock on the US island territory of Puerto Rico.

Each of these storms, fueled by higher temperatures caused by global warming, has exposed the criminal negligence of the American ruling class. Inadequate or nonexistent evacuation procedures and emergency shelters led to the deaths of some 250 people, according to official figures (the number of deaths in Puerto Rico is far higher than reported). Many more have had their lives upended, forcing them to fend for themselves after their homes were destroyed.

The American media and its talking heads have quickly moved on from any examination of the impact of Harvey, in keeping with the media's response to every disaster that hits the United States. In one of the few recent articles documenting the ongoing catastrophe, the Houston Chronicle reported that three months after landfall, "more than 47,000 flood victims are living in hotels and motels across Southeast Texas and beyond, a testament to the glacial pace of housing recovery."

These, the Chronicle states, "are the lucky ones." The newspaper continues: "Tens of thousands more have cobbled together their own temporary arrangements, living with relatives, in tents or on mattresses in barely habitable homes."

The meager government assistance made available to the tens of thousands without flood insurance in Texas is largely in the form of temporary subsidies for accommodation in motels through the Federal Emergency Management Agency (FEMA).

Those impacted must undergo a torturous application process for aid. According to the Chronicle, only about 9,500 families have qualified for additional housing assistance through FEMA beyond the temporary subsidies. Of these, "just one had been able to move back into a home repaired through FEMA's program, and 223 were living in a trailer or mobile home." The article adds that "no one has moved into a trailer, secured an apartment or seen repair work begin through the state's interim housing programs."

An investigation carried out by local TV station KHOU found that 22,208 students in the Houston area are considered homeless, with some districts reporting a homeless rate as high as 10 percent. It quoted child advocate Dr. Bob Sanborn: "This is something that could indeed affect this whole generation," the "Harvey generation."

Other consequences are harder to calculate. One report by National Public Radio noted that there are 25,000 people in the Houston area living with HIV and AIDS, and many had to go weeks without medication. "The hurricane closed pharmacies and clinics for a week -- or longer. Floodwaters ruined drugs. People who fled to other states couldn't get their prescriptions filled for HIV medicine."

Then there is the environmental impact. The flooded waters were filled with E. coli, lead, arsenic and other toxins, impacting those living and working in the region.

Much of the construction in the Houston area is being performed by day laborers, mainly undocumented immigrants who live in constant fear of deportation, intensified by the policies of the Trump administration. They work without any legal protection, often in hazardous conditions.

The Associated Press reports that the National Day Laborer Organizing Network recently interviewed day workers in Houston and found that "most are routinely exposed to mold and contamination... About a quarter of the more than 350 workers surveyed said they had been denied wages promised for cleanup work after Harvey, sometimes by employers who abandoned them at work sites after they had completed a job."

Similar conditions prevail in the other regions devastated by hurricanes this season. More than 40,000 people have applied for emergency food stamps in Florida, many waiting in long lines for the most meager assistance. The entire housing stock on the Caribbean island of Barbuda was wiped out, with investors and speculators swooping in to seize land.

Half of Puerto Rico remains without power more than two months after Hurricane Maria. Hundreds of thousands are still without clean water. The island has experienced what can only be described as a mass refugee crisis, with tens of thousands fleeing to the United States for housing and employment. The government is using the disaster as an opportunity to shut down or privatize schools and lay off teachers, as happened after Hurricane Katrina hit New Orleans in 2005.

Related Topic(s): Devastation; Disasters; FEMA; Harvey Flood; Homelessness; Hurricane Harvey, Add Tags
Add to My Group(s)
Go To Commenting
The views expressed herein are the sole responsibility of the author and do not necessarily reflect those of this website or its editors.