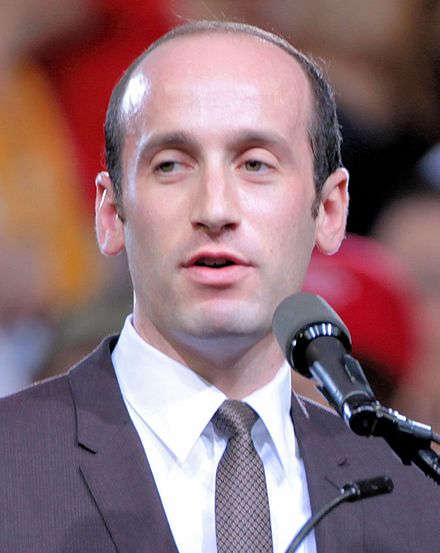 For me, Miller is the most detestable, despicable person after Trump, maybe even worse, since Trump is so stupid, it has taken Miller to come up with some of the most diabolical evil, heartless and cruel things Trump has put into effect.

So, I have prayers for Miller-- that he suffer horribly, that he become impotent, that he suffer permanent, lifelong damage to his health, even damage to his brain, so he cannot function in any job-- and let's throw in incontinence-- urinary and fecal-- so the caretakers he deals with are disgusted by him, so he never encounters any human temperance or kindness. In other words, I want Corona virus to create a life where he literally rots in hell.

Call me cruel. Call me heartless. This disgusting, evil, psychopathic POS monster should be the subject of criminal prosecution and execution for mass murder. But I'll settle for him suffering horrifically. If he were to be executed by an international tribunal, I'd be the first to volunteer to start the acid pouring into the watertight giant beaker he was contained in. Miller deserves cruel and unusual punishment. If that's too cruel, they could put him in an airtight container and just remove the air.

And of course, this would apply to Trump as well. Please, let me push the start button.

And if it happened, I'd assume that's what God wanted. And any of you white Christian Evangelical Trump supporters who thing I'm wrong-- just meditate on the hundreds of thousands who have lost their lives unnecessarily because of your evil, disgusting president. The blood from those deaths are on your hands.

Related Topic(s): Open Threads; Stephen Miller, Add Tags
Add to My Group(s)
Go To Commenting
The views expressed herein are the sole responsibility of the author and do not necessarily reflect those of this website or its editors.