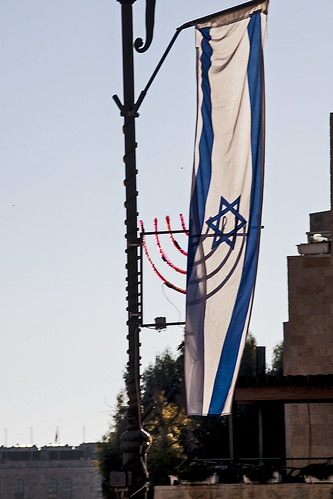 Three Israeli Symbols
(Image by zeevveez)   Details   DMCA
THE SCENE at Ben-Gurion airport this week was rather astonishing.

More then a thousand young male fans came to welcome the two Israeli Judo fighters -- one female, one male -- who had won a bronze medal each at the Olympic games in Rio.

Yet judo is not a very popular sport in Israel. Israeli sports enthusiasts pack the soccer stadiums, as well as the basketball courts. But in these two sports, Israel is far from winning any medals.

So Israeli crowds suddenly became judo fans (some called it "Jewdo"). People who did not go wild with enthusiasm were considered traitors. We did not hear anything about the judo champions who got the gold or silver medals. Were there any?

WE CAN only imagine what would have happened if the Israeli Olympic contingent had included Arab athletes. Arabs? In our contingent?

True, Arabs constitute some 20% of the Israeli population, and some are very active in sports. But God -- or Allah -- saved us from this headache. None made it to Rio.

But there is another question that should have drawn attention. Israel is -- by its own official definition -- a "Jewish state." It claims to belong to the Jewish people. It considers itself, in a way, the headquarters of "world Jewry."

Well, it simply does not exist where it counts. In the Olympic Games, a highly nationalistic event, nobody in Israel cares about the Diaspora Jews. To hell with them.

It seems that in sport, more than anywhere else, the distinction between Israelis and Jews is fundamental. So fundamental, indeed, that the question did not even arise. Who cares?

THE QUESTION did come up in the course of a debate which arose recently.

It started with a small article of mine in the liberal Israeli newspaper, Haaretz. I pointed out that some of the best and the brightest of Israeli youth have emigrated and struck roots in foreign countries. Oddly enough, their most popular new homeland is Germany, and the most preferred city is Berlin. I asked the emigrants politely to come back and take part in the struggle "to save Israel from itself."

Some of the Israelis in Berlin declined politely. No, but thanks, they said. They feel at home in the former Reichshauptstadt, and have absolutely no intention of coming back to Israel.

Related Topic(s): Arab; Diaspora; Israel; Olympics; Zionism, Add Tags
Add to My Group(s)
Go To Commenting
The views expressed herein are the sole responsibility of the author and do not necessarily reflect those of this website or its editors.