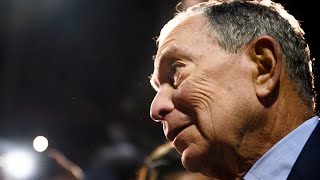 A recent exchange on MSNBC turned viral after Nina Turner, a national campaign co-chair for Bernie Sanders, described billionaire Michael Bloomberg as an "oligarch." That drew a heated response from MSNBC contributor and political science professor Jason Johnson, who insisted that Turner's word choice was unfair and inaccurate.

That's absurd. By any common definition, Bloomberg's an oligarch. He wants to buy your vote. Based on his record, he's also coming for your Social Security.

After this exchange, Sen. Turner tweeted, "I may not have a PhD (yet!) but I DO have the good sense of knowing what makes for Oligarchy."

Hey, I'm not a clockmaker, but I know what time it is.

My social media feed is filled with Democrats celebrating Bloomberg's return to the Democratic Party, his candidacy, and his pledge to up to a billion dollars to defeat Trump. (Few, if any, of these Democrats are repeating a line of attack often used against Sanders -- that he's not really a Democrat -- despite the fact that Bloomberg is a former Republican who only rejoined the Democratic Party two years ago.)

A brief recap of the "oligarch" argument: Turner, Johnson, and Chris Matthews were discussing the Democratic National Committee's last-minute rules change, which allowed Bloomberg into the next debate after he wrote it a large check.

"We should be ashamed of that as Americans, people who believe in democracy," said Sen. Turner, "that the oligarchs, if you have more money you can buy your way."

When asked if she thought Bloomberg was an oligarch, Turner didn't hesitate. "He is," she said, "buying his way into the race."

Johnson insisted this was "name-calling," and that a label like "oligarch" has "implications in this country that I think are unfair and unreasonable."

But is it true? Some landmark political science studies -- and most dictionaries -- say that it is.

Is This Country an Oligarchy?

Related Topic(s): Bloomberg News; Inequality; Medicaid; Medicare; Michael Bloomberg; Oligarchy; Social Security Cuts; Socialism For The Rich; Taxes, Add Tags
Add to My Group(s)
Go To Commenting
The views expressed herein are the sole responsibility of the author and do not necessarily reflect those of this website or its editors.