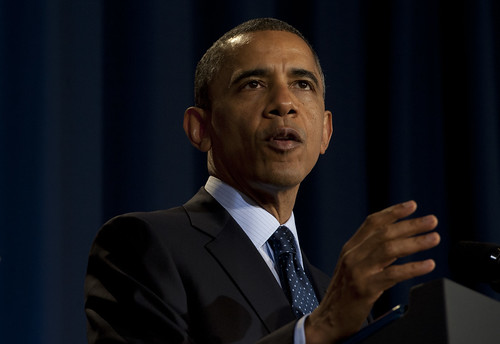 Warning to Democrats: recent weeks of polling show a narrowing Democratic lead in the midterm elections. Talk of a blue wave, which was justified by polling data until recently, should now give way urgency, focus and appealing to voters on issues that improve their lives and decide their votes.

The state of American politics today is total war from President Trump. He wages aggressive political war against countless Americans he treats as political enemies, diplomatic war against our democratic allies in Europe, partisan war against special counsel Robert Mueller who investigates Russia's continuing attack against America, and cultural war against minority groups he offends with vindictive insults to rally his political base.

Former President Obama, who a recent CNN poll showed is viewed as a better president than Trump by a margin of 56 to 37 percent, should now step forward, clearly, thoughtfully and forcefully. He should speak with the fierce urgency of now on behalf of Democrats facing the most important midterm elections in modern history.

The problem facing Democrats is not lack of a message, it is lack of a messenger. Democrats in Congress and across America are offering worthy and compelling policies, but the most vivid pictures voters see of Democrats on television are sound bite snippets of talk that is dominated by Trump.

Obama is the only national Democrat who would galvanize an explosion of attention from the media and voters about what Democrats stand for, who Democrats fight for and how Democrats will make life better in a nation that hungers for not just attacks against Trump, but a compelling alternative to Trump.

Obama and every Democrat should watch "Bobby Kennedy for President," the stirring new documentary from Netflix that I mentioned last week, because the story of RFK demonstrates by living history the heart, soul and fighting spirit that Democrats should offer to lead the nation in 2018 and 2020.

Many Americans feel left behind, alienated and worried because they do not share in the prosperity of the nation and do not feel that anyone in Washington cares about them. Many would vote for a politician who speaks thousands of falsehoods and is embroiled in dozens of scandals if they believe he is the only politician speaking to them, no matter how untrue his words.

Democrats in 2018 should remember Bobby Kennedy in 1968. RFK fought with passion and conviction for underprivileged blacks, exploited Hispanic workers, hard-hit white voters in Appalachia and young people whose dreams he offered the promise of coming true.

If Obama comes out swinging in 2018 as RFK came out swinging in 1968 he would light up the television screens and social media platforms with saturation coverage of the political battle of our century between two competing parties and visions, pitting the good things Obama did as president, which make him still so popular today, against the vile things Trump does to destroy them, which makes him so widely disliked by comparison.

Obama should fight like a lion for ObamaCare and against massive insurance premiums caused by the disastrous policies of Trump and Republicans, which would have been even more catastrophic except for the courageous single vote of a timeless American hero, Sen. John McCain (R-Ariz.), whom Obama and so many Americans honor with high praise.

Obama should fight like a lion for the Dreamers against the cruel, vicious and sometimes race-baiting attacks by Trump who broke his word to Democratic leaders and seeks to kill the Deferred Action for Childhood Arrivals program.

Obama should proclaim, as John Kennedy said, that a rising tide should lift all boats, while Republicans offer tax cuts that enhance big fortunes of the wealthiest and provide small change to everyone else. He should remind voters, as Robert Kennedy said the night Martin Luther King Jr. was assassinated, that America does not need more hatred and division but more love, and wisdom, and compassion toward one another as fellow members of the American family.

Related Topic(s): Democracy; Democrats; Elections And Campaigns; Obama Effect, Add Tags
Add to My Group(s)
Go To Commenting
The views expressed herein are the sole responsibility of the author and do not necessarily reflect those of this website or its editors.