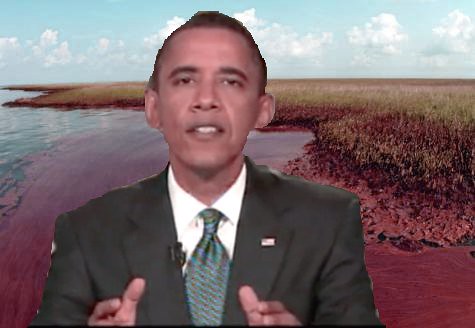 Nearly sixty days after an explosion on BP's Deepwater Horizon drilling rig killed eleven workers, injured seventeen others and created an oil gusher that has been spewing black clouds of oil ever since, President Obama delivered an Oval Office address with the hope of stemming the flow of anger among Americans.

President Obama explained that this is "already the worst environmental disaster America has ever faced." Seemingly forgetting the aftermath of Hurricane Katrina, he added, "Unlike an earthquake or a hurricane, it is not a single event that does its damage in a matter of minutes or days. The millions of gallons of oil that have spilled into the Gulf of Mexico are more like an epidemic, one that we will be fighting for months and even years."

The term continued to be "spill" despite the fact that it should now be accurately referred to as a "leak." It isn't a spill; if a coffee cup falls over and coffee spills, it doesn't continue to produce coffee for hours and hours after it spills. If a coffee cup could do that, there'd be no reason for people to buy over-priced cups of coffee from Starbucks.

And, actually, "leak" is too timid. This is not a "leak" or "spill." This is a "gusher." It's a hemorrhage. The planet is hemorrhaging and those at the top who are running the cleanup effort have no idea how to make the planet clot so the hemorrhaging will stop.

President Obama essentially broke the address up into three parts: the cleanup effort, the recovery and restoration of the Coast, and steps being taken to make sure another disaster like this never happens again.