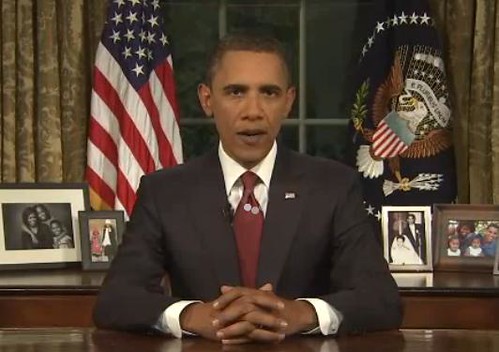 President Obama appeared before the American people to formally declare the combat mission was officially over in Iraq. Obama discussed what Iraqis must do now that the U.S. has ended combat operations, re-affirmed America's commitment to the war in Afghanistan, and ended with a focus on the economy and restoring the middle class in America.

In a much more reverential and eloquent manner (with no bombastic stunt like landing on a military aircraft carrier to lead us into the speech), Obama delivered a "Mission Accomplished" speech. It was an address to the troops to assert and assure them, their families, and those who had little stake in this war that this war was a war worth fighting.

Left out was how President Bush sent troops into a war based on the lies that Iraq posed an imminent threat to this country, how his administration falsely claimed Saddam Hussein had weapons of mass destruction, and how the administration successfully propagandized and convinced a large portion of the population that Saddam Hussein and others in Iraq played a role in the attacks of 9/11. Instead, Obama discussed the beginning of war by stating: "Seven-and-a-half years ago, President Bush announced the beginning of military operations in Iraq. Much has changed since that night. A war to disarm a state became a fight against an insurgency. Terrorism and sectarian warfare threatened to tear Iraq apart. Thousands of Americans gave their lives; tens of thousands have been wounded. Our relations abroad were strained. Our unity at home was tested."

Why should it be any surprise that "unity" was tested as a result of an administration that failed to convincingly lie an entire nation into war sell this nation a war because some people used logic, reasoning and asked questions to decide whether to support this military adventure or not and when they discovered the Bush Administration was fabricating a case for war they began to seriously doubt the motives for invading Iraq?

At one point, President Obama appeared to suggest that Americans with grievances toward former President George W. Bush should suspend those grievances. He said he was "mindful that the Iraq war has been a contentious issue at home." He admitted he disagreed with Bush on the Iraq War but asserted that "Bush's support for our troops or his love of country and commitment" to American security was unflinching, which essentially meant liberals or progressives should forgive and possibly forget any sort of criminal or negligent activity Bush participated in that took place as a result of the Iraq War (like the leaking of Valerie Plame's identity as a CIA agent when her husband, Joseph Wilson, failed to come back with "evidence" to promote the idea that Iraq had WMDs).

Kevin Gosztola is managing editor of Shadowproof Press. He also produces and co-hosts the weekly podcast, "Unauthorized Disclosure." He was an editor for OpEdNews.com
Related Topic(s): Iraq; Iraq War; Iraqis; Obama Administration; Veterans Iraq; War Iraq, Add Tags
Add to My Group(s)
Go To Commenting
The views expressed herein are the sole responsibility of the author and do not necessarily reflect those of this website or its editors.