CODEPINK: Women for Peace at the Nomination Hearing for new US Ambassador to Yemen
(Image by Photo by Ann Wright)   Details   DMCA

While the press has closely followed the Senate efforts to stop US support for the Saudi war in Yemen in the wake of journalist Jamal Khashoggi's murder, a December 4, Senate Foreign Affairs Committee meeting introducing Donald Trump's nominee for Ambassador to Yemen slipped under the radar.

Christopher Henzel is presently the Charge d'Affairs, or acting Ambassador to Saudi Arabia. A career Foreign Service officer, he has been the acting Ambassador since the departure of the Obama administration's appointee in January 2017. He is now Trump's pick to become the highest US diplomat to the war-torn nation of Yemen, but his initial appearance before the US Senate Foreign Relations Committee did not go very well. 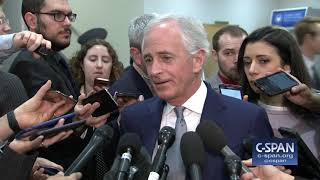 Senators Corker, Mendenez, Kaine, Markey and Young used the appearance as an opportunity to skewer the Trump administration's participation in the Saudi war on Yemen and its handling of the murder of journalist Jamal Khashoggi.

In the committee hearing, Corker said "There is zero doubt in my mind that Prince Mohammed ordered and monitored the killing of Khashoggi. If Prince Mohammed were put on trial, a jury would unanimously find him guilty in about 30 minutes." Corker said that the Trump administration's assertion that there is no direct evidence of MBS's involvement was "unacceptable."

At a time when US senators, both Democratic and Republic, are finding the US relationship with Saudi Crown Prince MBS untenable, Henzel, as the acting US Ambassador, has been close to MBS. As top US representative in Riyadh, Henzel is undoubtedly the American who has had the most meetings with MBS and senior officials of the Saudi government, including accompanying President Trump and Secretary of State Pompeo in their meetings with MBS.

Granted, Henzel does have extensive experience in the Middle East, but no history of any diplomatic breakthroughs. Like so many other foreign service people in the region, he seems to have been more an appendage of the Pentagon. He was director of the Office of Israel and Palestinian Affairs at the Department of State in Washington from 2013 to 2016. He headed the provincial reconstruction office in Mosul, Iraq in 2010-2011; was deputy chief of mission and charge in Manama, Bahrain from 2004-2007, when peaceful protesters were brutally repressed. He worked in US Embassies in Yemen and Pakistan, and from 1985 to 1987 in Saudi Arabia. When assigned in Washington, Henzel worked on budgeting for U.S. military and economic assistance for the Near East region, on Egyptian and Maghreb economic affairs, and was the desk officer for Iran.

Senator Menenedez asked Henzel if he had read the recent reports by human rights organizations about the humanitarian crisis in Yemen. Henzel replied that he had heard that the reports were finished, but he had not read them, to which Menendez asked: "Wouldn't it be wise for a person coming before the committee to have read the reports?" Henzel bumbled a "Yes."

Other questions to Henzel about the Saudi war on Yemen included the Saudi breaking of the ceasefire with 45 air attacks the previous day, the continued closing of the port of Hudiadah where food deliveries have fallen by 50 percent. Senator Tim Kaine reminded Henzel that Iran had not been involved in Yemen until the Saudis began attacking the Houthis. Houthis had been challenging the central government of Yemen for decades because they as a minority had been left out.

As the acting US Ambassador to Saudi Arabia, Christopher Henzel is neck-deep in the blood of the Yemeni people and confirming him as the US Ambassador to Yemen will continue the US role in the starvation and deaths of millions of Yemenis.

His experiences on Middle East issues from Palestine to Iran, from Saudi Arabia to Yemen are supporting policies calling for death and destruction rather than non-killing approaches through real diplomacy.

Ann Wright is a 29-year US Army/Army Reserves veteran, a retired United States Army colonel and retired U.S. State Department official, known for her outspoken opposition to the Iraq War. She received the State Department Award for Heroism in 1997, after helping to evacuate several thousand (more...)
Related Topic(s): Ambassador; Christopher Henzel; Houthis; Yemen Destruction, Add Tags
Add to My Group(s)
Go To Commenting
The views expressed herein are the sole responsibility of the author and do not necessarily reflect those of this website or its editors.