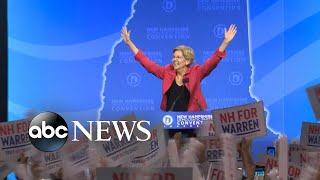 Elizabeth Warren rises in the polls ahead of next debate
(Image by YouTube, Channel: ABC News)   Details   DMCA

In the conventional view of American politics, Joe Biden is a moderate while Elizabeth Warren and Bernie Sanders are on the left and Donald Trump is on the right.

This conventional view is rubbish. Today's great divide is not between left and right. It's between democracy and oligarchy.

There are no longer "moderates." There's no longer a "center." The most powerful force in American politics today is anti-establishment fury at a rigged system.

If Biden implodes and neither Buttigieg nor Klobuchar takes the lead from Warren, Wall Street and corporate Democrats hope former New York mayor Michael Bloomberg will ride into the primary at the last minute.

Related Topic(s): Corruption; Democracy; Democrats; Election; Money; Oligarchy; Sanders-Bernard; Trump; Wall Street; Warren-Elizabeth, Add Tags
Add to My Group(s)
Go To Commenting
The views expressed herein are the sole responsibility of the author and do not necessarily reflect those of this website or its editors.