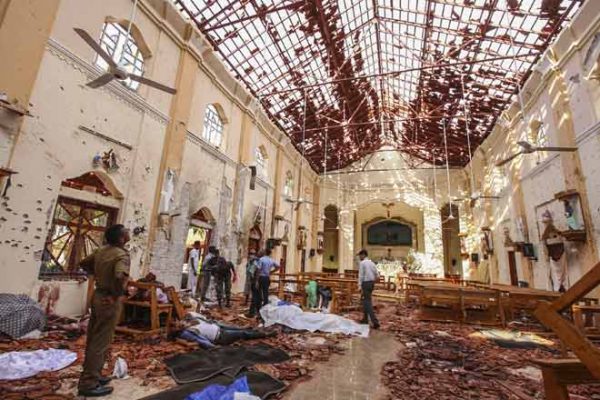 The bomb blasts in Sri Lanka, which have killed over 200 people, are markedly different from Christchurch shooting of only a month ago.

The mass-shooting in two different mosques in Christchurch, which left 50 dead, justifiably drew world's horror and outpouring of sympathy. New Zealand's prime minister Jacinda Ardern became a global phenomenon for wearing a chadar while sympathizing with the bereaved families. Every leader of the world worth his salt shed tears. Donations poured in amounting to millions. Rock concerts were organized to help. In many ways, sympathy and support dumbed the outrage.

The Sri Lanka tragedy was already ebbing in a matter of hours. There are no editorials underlining the threat of Islamic extremism to the free world. Even though a Jihadi Islamist group, with links to Islamic State (IS), is suspected, the descriptions in our newspapers is about a "local network... without any criminal background." Islam as a violent ideology is not in debate. Instead, it is circumcised and localized.

Why the Western world is afraid of "Islamophobia" (fear against Islam's ideology)?

Two things are at work here. One, such is the flux of petro-dollars since discovery of oil in the Middle East in the 1970s that money and donations have poured in from the Wahhabi countries of Saudi Arabia, Qatar, Kuwait, UAE, etc, which have subsidized governments, liberal networks and western newspapers and led to bursts of madrasas and mosques on their lands. There is exponential growth in monumental Islamic charities around the world.

Two, it's the prevalent attitude of liberals around the world that treat Islam as a "minority" and hence a just case for protection against "Islamophobia." They are unwilling to look at Islamic history, the resolve of its ideologues and the violence spilling blood on their streets and metros as a daily occurrence. Inconvenient voices, such as the ones of Christopher Hitchens and Tommy Ribinson, are never given a proper hearing.

No heed is paid when one of the most influential living Islamic scholars of Sunni Islam (Yusuf al-Qaradawi assures his followers: "We will conquer Europe, we will conquer America! Not through the sword, but through dawa (outreach)." (As it is in India where the mention of Ghazwa-e-Hind--conquering of India--by its proponents is routinely glossed over.)

How many have paid attention to WikiLeaks cables that point out how Saudi Arabia manipulates foreign-media outlets? That in Finland, citizens have to make a distinction between "Islam" and "Radical Islam" or else they stand prosecuted and fined (a Finnish politician, Terhi Kiemunki, was fined 450 euros for the writing of a "culture and law based on a violent, intolerant and oppressive religion")? It's true of most liberal Europe. Liberals call everyone and anyone as "xenophobic" or "Islamophobic" for criticizing Islam. They don't realize it's their way of life that is under threat. Every time an Australian senator speaks out against Islam, he is publicly manhandled, and his words are brushed under the carpet. Tolerating the intolerance inherent in a creed is actually stopping it from curing itself of its dead weeds.

So watch the reaction of the world as it desists clamping down on radical Islam on Sri Lanka tragedy. They would be quick to pounce if an aggrieved citizen, sick of Jihadi Islamists around him, takes recourse to what mass-killer Brenton Harrison Tarrant did in Christchurch against Muslims. Closer home you can read Indian Express, which names only the name of the suspect organization without mentioning its Islamic Jihadi roots on Sri Lanka horror.

So be aware, be vocal against the powers which cotton-wool the truth and put our world in danger and blunt the process of reformation of a violent ideology.

Related Topic(s): Culture; Donations; Editorials; Ideology; Islam; Killed; Liberals; Muslims; Newspapers; Oil; (more...) Shooting; Threat, Add Tags  (less...)
Add to My Group(s)
Go To Commenting
The views expressed herein are the sole responsibility of the author and do not necessarily reflect those of this website or its editors.