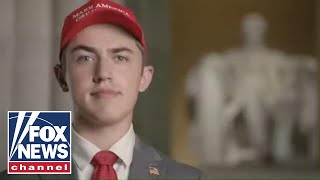 A common complaint among Republicans is that their opponents are mainly in the business of manufacturing victims and turning those victims into Democratic voters.

That complaint is true as far as it goes. Yes, Democratic politicians work overtime to get out the vote for their party by portraying society at large as having wronged members of particular racial, religious, ethnic, or gender/sexual groups, and by promising reforms that end the discrimination and compensate those discriminated against.

But grievance-based politics is nothing new, nor does America's political "left" enjoy a monopoly on it. For proof of that latter claim, one need look no further than the case of Nick Sandmann.

"I'm the teenager who was defamed by the media," Sandmann told the Republican National Convention on August 26. But, he said, "I would not be canceled."

Leaving aside the question of precisely how turning him into a celebrity (with stories that, while initially mildly inaccurate, were almost instantly corrected as more information came in) constitutes an instance of the "cancel culture" he decries, let's be clear about what he, and his handlers, are up to:

Nick Sandmann publicly plays the victim for money. That's his job, and it will probably remain his job until he's stretched his proverbial 15 minutes as far as they can be stretched.

After participating in an anti-abortion protest in Washington, DC, Sandmann went through a tense moment with some other protesters, who were agitated about other issues, and his motives were (mistakenly, but not libelously in any sane universe) misinterpreted by journalists based on partial video.

The settlement amounts weren't publicly disclosed, but while they likely came to pennies on the demanded dollar, they also probably brought Sandmann more wealth than a life of real work would have. It's hard to blame a teenager for jumping on a get-rich-quick scheme, as presented by two experienced ambulance chasers. Especially one that's actually worked out for him.

Not that such a bloc would vote Democrat absent the attention. But Republicans are afraid the people resembling that description might not bother to vote at all. And they need every vote they can get.

Related Topic(s): Republican, Add Tags
Add to My Group(s)
Go To Commenting
The views expressed herein are the sole responsibility of the author and do not necessarily reflect those of this website or its editors.