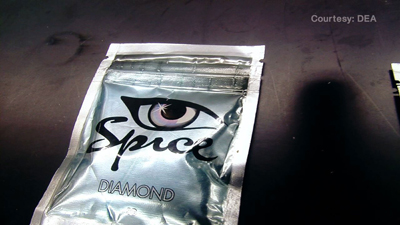 In mid-August, the New Haven, Connecticut Register reports, more than 70 people suddenly fell ill at a local park, collapsing and losing consciousness. Terror attack? Accidental industrial release of a deadly chemical? No. The culprit was "K2," aka "synthetic marijuana," laced with fentanyl. The victims were revived by first responders and at the local hospital. Thankfully no one died and an alleged drug dealer was quickly arrested.

But, as law enforcement likes to tell us, getting a single dealer off the street does little good. We need to move up the food chain and nab the people at the origins of this thing.

Who are those top dogs? Whose names can be presented to a grand jury for indictments in the conspiracy to put "synthetic marijuana" on our streets? Here are two: Uttam Dhillon and Scott Gottlieb.

Dhillon is the Acting Administrator of the US Drug Enforcement Agency. Gottlieb heads the US Food and Drug Administration.

Together, Dhillon and Gottlieb oversee the "scheduling" of drugs under federal law. And, like their predecessors, they have conspired to create a market for "synthetic marijuana" by putting REAL marijuana on Schedule I, fraudulently claiming that it has a "high potential for abuse," "no currently acceptable medial use," and a "lack of accepted safety."

In point of fact, marijuana is about as "abused" as caffeine, is demonstrably an effective treatment for various medical conditions (Queen Victoria drank it as a tea for menstrual cramps), and isn't even in the same league as alcohol or tobacco when it comes to safety -- year after year, the number of marijuana overdose deaths in the US totals a big whopping zero. It's a common, benign plant, with numerous useful attributes, that grows in all fifty states.

So, why do Dhillon and Gottlieb conspire to keep marijuana on Schedule I? When you have to ask why, the answer is usually "money."

De-scheduling marijuana would mean fewer jobs and lower budgets at those agencies. That is the sole plausible reason to keep marijuana on Schedule I. The other reasons are, simply, lies. And that makes conspiring to do so a matter of theft by deception, aka fraud.

The New Haven overdoses and incidents like them are an aggravating factor. The DEA/FDA conspiracy to keep marijuana off the legal market, and to make it less available illegally through violent law enforcement action, creates the market for unsafe substances like "synthetic marijuana."

If not for Dhillon and Gottlieb, the 70-plus New Haven victims would have been able to purchase the real thing -- an eminently safe substance no more dangerous, and possibly less dangerous, than an everyday energy drink -- at their local stores of choice. They'd have had pleasant, euphoric, brief highs before going about their business instead of collapsing and requiring medical attention.

It's time to put these racketeers out of business. Indict, convict, and de-schedule.

Related Topic(s): Dr Scott Gottlieb Fda Commissioner; Drug War; Marijuana, Add Tags
Add to My Group(s)
Go To Commenting
The views expressed herein are the sole responsibility of the author and do not necessarily reflect those of this website or its editors.