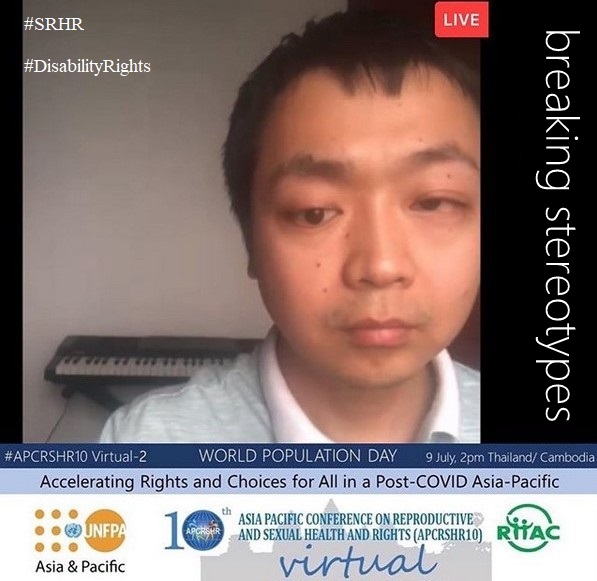 They may be differently abled, but they do not lack in ability. Yes, I am talking about the more than one billion people in the world who live with some form of disability. They could be persons with impaired functions of the senses, mobility, cognition or with psychosocial difficulties. Out of these, an estimated 690 million live in the Asia Pacific region, which accounts for the largest number of persons with disabilities in the world.

In his foreword to the World Report on Disability physicist Dr Stephen Hawking, while conceding that "the majority of people with disabilities in the world have an extremely difficult time with everyday survival, let alone productive employment and personal fulfilment", insisted that "we have a moral duty to remove the barriers to participation, and to invest sufficient funding and expertise to unlock the vast potential of people with disabilities."

One such person is 34 years old Cai Cong - who is a noted sexual and reproductive health and rights (SRHR) and disability rights pioneer from China - a country which is said to have the largest number of persons with disabilities in the world, with over 85 million persons. Visually impaired, Cai has conquered his lack of vision with his sheer ability of breaking stereotypes.

Cai Cong was speaking at the second virtual session of the 10th Asia Pacific Conference on Sexual and Reproductive Health and Rights (APCRSHR10) held around World Population Day in partnership with United Nations Population Fund (UNFPA):

"I lost my eyesight 24 years ago when I was 10 years old. My family had no knowledge on how to deal with my disability. I went to a regular school to study without any special support. We had a chapter in our Biology book on the Reproductive System. But our teacher said you can read it by yourself. While my other classmates could do so, I could not. I was too shy to ask others. That was my first brush with sexual and reproductive health as a person with disability. I did my High School in 2005. I could not join the University, as at that time there was no provision by the University to provide any help (by way of providing a writer) for blind persons to appear for the entrance examination. So I had no other option but to join a special college for the blind to study acupuncture and massage. In the first semester we had Anatomy as a subject that also deals with the reproductive system. Here again, our teacher asked us to learn it by ourselves. She also said that 'it was not necessary for your future because you are a masseur and you are blind'. I found this statement very shocking indeed. We were University students and yet she thought that knowing about our reproductive system was not necessary for us. These two incidents made me think about the dismal situation of persons with disability regarding their sexual and reproductive health and rights" said Cai Cong.

While China was among the first countries to ratify the Convention on the Rights of Persons with Disabilities in 2008, many of its persons with disabilities still struggle with myths and stigma around their sexual and reproductive health and other rights. Cai could not join the University and had to train as a masseur much against his wishes. But he had the urge and desire to do something more worthwhile in life. So he became an advocate to fight for equal rights to education for the visually impaired through the Disabled Person's Organisation in Beijing. He joined One Plus One Network of Disability in 2010 and also became project director of Youren Foundation, a nonprofit organization for disabled people.

Cai Cong added: "My wife is also blind. She too studied massage in a special school for the blind, and then opened her own massage clinic/ parlour. Mostly the customers go to a massage parlour after work in the late evening. But as a woman with disability she faced a lot of sexual harassment. So she started closing her clinic at 7pm everyday. But there were very few customers who came before this (early) closing time. This made her business dip down, she went bankrupt very soon and had to close down her business. Her parents were not in favour of her taking up any other job. They said the best choice for her was to get married. But that was not her dream. So she fought with her parents and went to Beijing, where she became a makeup artist. She now trains blind girls in the art of makeup."

Citizen News Service (CNS) specializes in in-depth and rights-based, health and science journalism. For more information, please contact: www.citizen-news.org or @cns_health or www.facebook.com/cns.page
Related Topic(s): Blind; Deaf; Disabilities; Disabilities; Health; Health; Healthcare; Rights, Add Tags
Add to My Group(s)
Go To Commenting
The views expressed herein are the sole responsibility of the author and do not necessarily reflect those of this website or its editors.