I wrote this article a couple of years after 911.I think it would be interesting to read it again after the debacle of Afghanistan. 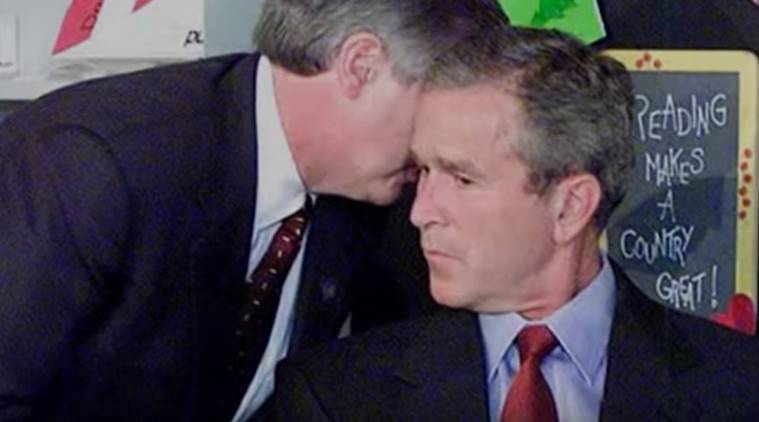 "Why don't they have Bibles? Can we get them Bibles? Would they like Bibles?"
The most reported inquiry by George Bush about the fate of the US Air crew of the American surveillance plane downed over China.
Newsweek, April 23, 2001, Atlantic edition

When I read of the above quote in the papers during the Chinese standoff, I was happy to find the missing link in understanding George Bush.

The incident occurred five months before 911. An American spy plane collided with a Chinese fighter plane, forcing the American plane to land on an island off of China. The crew had infuriated the Chinese by remaining locked in the plane until they had destroyed sensitive material and equipment. When they emerged, they were taken prisoner and were held for 22 days while America negotiated for their release.

As State Department officials worked on the situation, President Bush made the above comment, which was considered the most reported statement of the event. Considering the fact that the situation was quite tense and there were so many possibilities of an escalating crisis. Hearing that the president is worried about them having access to the Bible and exercise equipment was simply astonishing.

However, this event was quite useful in learning about Bush and his psychological makeup. President Bush had already admitted to having had severe alcohol problem during his younger years and that he stopped drinking when he was confronted by his wife and mother. The Chinese incident showed me that like many other recovering alcoholics Bush is using physical exercise and hyper religiosity to keep himself sober.

Research on prolonged exposure to drugs and alcohol indicates that the brain of an alcoholic is often permanently harmed by the chemicals and loses its ability to maintain necessary levels of endorphins. Endorphins are the famous natural opiates that the body produces to deal with physical and emotional pain. Not having enough natural opiates makes the person vulnerable to physical and emotional pain, which can potentially push the person towards a relapse. Recovering alcoholics have a lot of difficulty in dealing with physical and emotional pain unless they find a way to produce endorphins in a natural manner. Psychologists routinely encourage patients to turn to vigorous exercise.

President Bush is perhaps the fittest president in history; however, he is not a "Health Nut." He is just obsessed with exercise. If he was seriously devoted to his health he would not have abused alcohol, or indulge in activities like overexposing himself to the sun and eating what is reported to be his favorite snack, pretzels (at least, that's what he choked on while watching television).
Why the Bible:
A recovering alcoholic has to deal with the cognitive aspects of alcoholism as well. The cravings for alcohol are quite strong and potentially overpowering. Some successful recovering alcoholics deal with the cravings by replacing their obsession of drinking with hyper religiosity.
Both supporters and detractors agree that the President is a religious man, unwavering in his beliefs. He refers to his work as a 'crusade.' He abhors the idea of abortion, homosexuality and, of course, gay marriage. He openly admits that he makes his decisions based on biblical teachings.

Learning disability:
There have been many reports that the president suffers from Dyslexia (severe difficulty with reading and writing). Most people suffering from Dyslexia eventually learn how to read and write, however in some cases, reading remains a chore and they get little pleasure from it. President Bush seems to belong to this group. He does not like to read books or newspapers and relies heavily on others to do it for him. For example, Bush said he believed that the CIA memo that warned of an imminent Al-Qaeda attack on 9/11 was 'read to him.'
The president has very poor penmanship. His handwriting is not bad like a doctor; rather, it is primitive hand writing like that of a child. A thank you card he sent to Dick Clark had only one sentence ... but it took both sides of a 4x6 card to write it. Bush has been questioned on this issue numerous times, and he continues on denying it. However, his response to one of these questions is most revealing:

President Bush's language deficit does not seem to be limited to Dyslexia. He often mixes two words to come up with a meaningless term, such as "misunderestimate." Entire books have been written about his malapropos (the misuse of words). He also has problems with verbal memory and syntax. The latest one of these errors was:

"We got an issue in America. Too many good docs are gettin' out of business. Too many O-B-G-Y-N's aren't able to practice their...their love with women all across this country." - Poplar Bluff, Missouri, Sep 7, 2004

George W. Bush has never been a good student and, in fact, he takes pride in being a self-described 'C' student. When he took his pilots' exam to enter the National Guard, he scored at the 25th percentile. That is the lowest passing grade for a pilot.

Related Topic(s): Bush AWOL-in-Chief; Bush Administration Incompetence; Bush And 911; George Bush, Add Tags
Add to My Group(s)
Go To Commenting
The views expressed herein are the sole responsibility of the author and do not necessarily reflect those of this website or its editors.

Why 27 People a Day Die From Air Pollution in Tehran