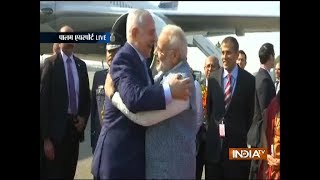 If you believed that the Indian people universally welcomed Israeli Prime Minister Benjamin Netanyahu to India, then you were misled. The corporate media -- both in India and in Israel -- concentrated on the press releases from the offices of the prime ministers and bought hook, line and sinker into their well-orchestrated propaganda.

There were the typical visits: to the Taj Mahal, to Gandhi's Sabarmati Ashram and to Gandhi's samadhi (memorial). There was the opening of a technology centre and there was the meeting with business leaders.

Yet the media not only did not cover the true purpose of Netanyahu's visit, it also ignored Indians who protested against it and called for solidarity with Palestine.

Amid all the pomp and ceremony, what the media failed to discuss were the arms deals that Indian Prime Minister Narendra Modi and Netanyahu discussed. India is a major buyer of Israeli weapons; between 2012 and 2016, the country bought 41 percent of Israeli arms exports.

The meetings of "business leaders" which were mentioned in the media included weapons manufacturers and weapons contractors -- merchants of war -- who, in their blue suits and silk ties, pretended that their business is business and not war. What was discussed at these meetings was quite important.

In April 2017, India and Israel signed a deal for military equipment worth $2bn. But on January 2 this year, the Indian government informed the Israeli arms companies that it would no longer be honoring the $500m contract to buy the Spike anti-tank missiles. During Netanyahu's visit, however, he pointedly said that the deal was back on the table. Apparently, Modi had personally told Netanyahu to disregard the January 2 notice.

To do so, Modi had to go against the Indian state-owned military company Defense Research and Development Organization, which was acting in line with the Indian government's "Make in India" industrial policy. Rather than make anti-tank missiles at home, India will have to pay up to import Israeli technology.

Weapons are at the heart of the relationship between India and Israel. All else is secondary. It would, however, have been too crude to emphasize the weapons deals. Modi and Netanyahu are both showmen. They understand the art of propaganda. To reduce their relationship to brokering for arms deals would not do. They want to be seen as high-minded men who are bringing their countries together for a higher purpose.

Mahatma Gandhi has been long used to being misused in India. A man who eschewed money and detested the profit motive of capitalism is honored on each of India's currency notes.

In 1931, when Gandhi was asked about military force, he told a reporter that he hoped a future India would have "the smallest army imaginable." India has, currently the second largest standing army in the world (after China, with the United States in third place). India, which spends $56bn a year on its military, is fifth on the list of countries by military expenditure ( after the United States, China, Russia and Saudi Arabia). It is by far the world's largest importer of weapons (followed by Saudi Arabia).

That Modi took Netanyahu to Gandhi's main ashram on the Sabarmati River, near Ahmedabad and that he took to to his samadhi at Raj Ghat (where he was cremated) is an insult to India's late anti-colonial leader. This was a outrageous decision not only because these men had essentially come together to cement an arms deal, but because of Gandhi's views on the Palestinians -- a people forgotten by the corporate media during Netanyahu's propaganda trip.

In 1938, Gandhi wrote, "Palestine belongs to the Arabs ["] It is wrong and inhumane to impose the Jews on the Arabs." He was writing as a man involved in an anti-colonial struggle. In his view, Europe couldn't just expel Palestinians from their land and, driven by its own history of anti-Semitism, settle the European Jewish population there.

In 1946, two years before the formation of Israel, Gandhi wrote: "Why should [Jews] depend upon American money or British arms for forcing themselves on an unwelcome land? Why should they resort to terrorism to make good their forcible landing in Palestine?" He had in mind groups like the Haganah and Irgun, which used violence against the British and the Palestinians as a prelude to the forcible expulsion of the Palestinians from their land during the 1948 Nakba (catastrophe).

Related Topic(s): Benjamin Netanyahu; Gandhi; India; Israel; Nakba; Narendra Modi; Palestinian, Add Tags
Add to My Group(s)
Go To Commenting
The views expressed herein are the sole responsibility of the author and do not necessarily reflect those of this website or its editors.