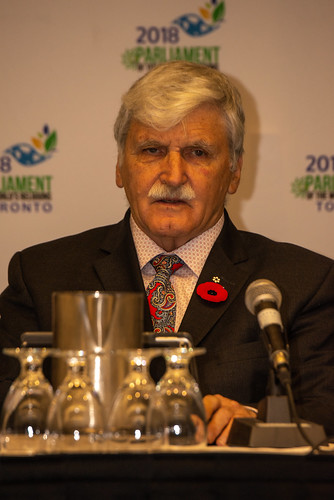 At its convention in Que'bec City next week Canada's largest private sector union is set to give Dallaire its Nelson Mandela Award, which is supposed to go to an individual advancing the cause of international peace and justice. But, Dallaire is an ally and apologist of Paul Kagame, the most bloodstained African leader. Kagame's repeated invasions of Congo is responsible for incredible bloodletting, gaining him the moniker "butcher of Africa's Great Lakes." Beyond his support for Rwanda's ruthless dictator, Dallaire has taken numerous positions hard to align with championing international peace and justice:

Most significantly, Dallaire has deliberately twisted the events he was party to in Rwanda in 199394 to align with those seeking an ideological cover to justify US-backed Western interventions (and the Kagame dictatorship). In response to the general's self-serving portrayal of his time in Rwanda, the overall head of the UN mission in Rwanda, Jacques-Roger Booh Booh, published Le Patron de Dallaire Parle (The Boss of Dallaire Speaks). And many other individuals in the UN mission, such as the head of Belgian troops in Kigali Colonel Luc Marchal and UN intelligence officer Amadou Deme, have contradicted Dallaire's portrayal of the complex tragedy that engulfed Rwanda and Burundi.

The Unifor leadership doesn't care about any of this. They are seduced by the "Canadian hero" propaganda surrounding Dallaire who spoke at Unifor's 2015 convention and at conventions of its predecessor union. (In another sign of the union's political outlook, foreign minister Chrystia Freeland is also set to address the Unifor convention.) I contacted the union's communications department (I previously worked at Unifor) to ask, "who is driving this and if they're willing to comment on record about Dallaire's politics, specifically his continued support for the most repressive and murderous African leader: Paul Kagame."

At the time of publication no one from Unifor had been put forward to discuss Dallaire's award.

Associating Dallaire with Mandela is downright embarrassing. The anti-apartheid leader strongly backed the Palestinian liberation struggle and praised Fidel Castro. Mandela also supported Libyan leader Moammar Gaddafi against NATO's machinations (alongside the African Union). After Haitian president Jean Bertrand Aristide was ousted by the US, France and Canada, South Africa gave him asylum and Mandela invited Aristide to his home. Mandela criticized the US war in Afghanistan and aggressively denounced the 2003 invasion of Iraq.

Hopefully, when Dallaire speaks someone at the convention will take the stage with a sign saying, "why do you support murderous dictator Paul Kagame".

Related Topic(s): Genocide; Nelson Mandela, Add Tags
Add to My Group(s)
Go To Commenting
The views expressed herein are the sole responsibility of the author and do not necessarily reflect those of this website or its editors.