Education: MOTION (Forsmark/Meredith) to recommend NENC support the call for a moratorium on new Proposition 39 co-locations or expansions until the COVID-19 crisis has passed. (Passed 7-0-0 on 5/13/20)
-From the May 20, 2020 agenda of the
Northridge East Neighborhood Council

Proposition 39 was passed by California voters in 2000. The primary purpose of the law was to lower the threshold needed to pass school bonds from two-thirds of the electorate to 55%. However, hidden within the proposition's text was a clause that mandated that "each school district shall make available, to each charter school operating in the school district, facilities sufficient for the charter school to accommodate all of the charter school's in-district students in conditions reasonably equivalent to those in which the students would be accommodated if they were attending other public schools of [the] district."

While the proposition specified a result, it did not provide a specific method of how this was to be accomplished. As a result, the California Charter School Association has been able to use the courts to force the co-location of privately run charter schools onto public school campuses even though the word "co-location" does not appear anywhere in the voter-approved text. As long as a Los Angeles Unified School District (LAUSD) campus has "unused" space, it can be subjected to an invasion by a separately managed school.

The problems of Prop 39 are magnified by the existing definition of "unused" in relation to what is available. Contrary to how most people would define the word, this is not space on a campus that is empty and collecting cobwebs. Instead, it has come to mean any area of the campus that is not assigned to a teacher. In the case of Shirley Avenue Elementary School in Reseda, this includes spaces that were being used as a computer lab, a robotics room, an art room, a music room, a one-on-one room, space for after-school programs, and a parent center. Special education will be hit particularly hard if Citizens of the World Charter follows through with their planned occupation of Shirley Avenue as rooms for psychological services, adaptive physical education, interventions, speech therapy, and occupational therapy are considered "unused" and subject to a takeover.

While the community usually gets a chance to give their input into the co-location process at specific schools, the COVID-19 shutdown has prevented this from occurring. However, t he LAUSD continues to make preparations to reconfigure space even as communities organize to resist the loss of space for their schools.

The COVID-19 pandemic will also cause additional chaos when students eventually return to their physical classrooms. All schools will be required to adjust to a new normal of social distancing, heightened cleanliness measures, and other safety protocols. Any actual unused space will be needed to help schools achieve the requirements of smaller class sizes. Also, successful implementation of these measures will be hampered if additional students are placed on campuses with charter school administrators that do not report to the district or have public accountability. With this in mind, United Teachers Los Angeles (UTLA) has given voice to the community in demanding a moratorium on all new Prop 39 co-locations during the current crisis "to protect the lives of students, educators, and families."

At the May 20, 2020, meeting of the Board of Directors, the Northridge East Neighborhood Council added their voice to those requesting that there be no new or expanded Prop 39 co-locations until the end of the COVID-19 crisis. The vote to support the moratorium was unanimous.

With the California Charter School Association's handpicked superintendent staying silent on the subject, it is time for the LAUSD School Board to take action. In the primary election held last March, those supporting public schools won a majority of the votes in each of the four races. It is time for their will to be respected and the needs of the 80% of students who attend public schools to have their safety and well-being put above the needs of unelected charter school governing boards. Our elected leaders must ensure a moratorium is enacted as requested by the Northridge East Neighborhood Council, the district's teachers, parents, and the community. 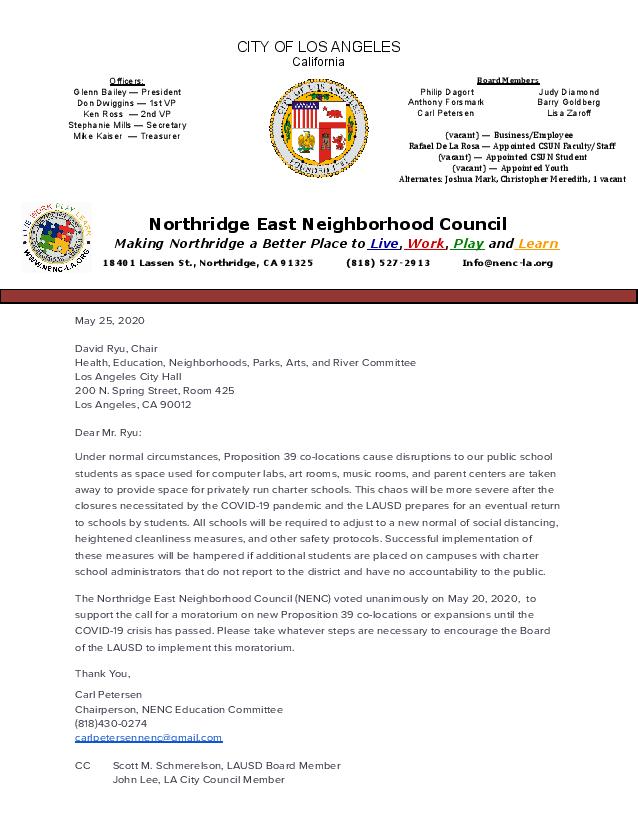