The great lie on which our modern economic system is based is that much onerous and unpleasant work needs to be done to keep us all alive and well, and that without the impending threat of destitution, ostracism, and starvation, there would be no one volunteering to do all that work.

(Image by Charlie Chaplin)   Details   DMCA
The truth is that, historically, tribal hunter-gatherer cultures have done well with much less than what we call a normal work-week, and they were doing things that were in accord with human nature, rewarding and interesting, not onerous.

The truth is that with automation, very little work that is unpleasant or repetitive is left to sentient humans.

(Image by YaleEnvironment)   Details   DMCA
The truth is that genuinely productive work is satisfying and fulfilling, and most humans are called to do that kind of work, and in fact we feel destitute without it

The truth is that with a different social and economic order, all 7½ billion of us could live in comfort without the benefit of activity that is onerous or distasteful.

I could go further and describe some of the distasteful work that workers are drawn into, by poverty and lack of opportunity. I could characterize it as dishonest, destrutive, often coercive or downright violent, benefiting the few who hold power and property and allowing them to continue dominating those who have little. I could decry the agenda of the elite and call out their militarism and intimidation...

I could, but instead I'll just remind you that our lives could be far more rewarding and less conflictual if we self-organized for peaceful, productive activity in harmony with nature. 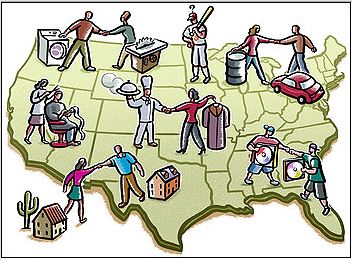 Related Topic(s): Economics, Add Tags
Add to My Group(s)
Go To Commenting
The views expressed herein are the sole responsibility of the author and do not necessarily reflect those of this website or its editors.