There are two ideas about the relationship between conscious awareness and the brain.

Many of the smartest people in the world are trained in physics and steeped in computation. Overlapping this group is the set of researchers in artificial intelligence. Almost all these people tend to favor #1.

The Scientific World-View which has arisen in the last 150 years regards physical matter and its fields as a closed system in which all causality is accounted for. There is no need nor indeed is there room for consciousness as a separate element of reality.

Weighing in for #2 is a 30-year course of experimentation in the Princeton University laboratory of Robert Jahn and Brenda Dunne, 1975-2005. Jahn had a PhD in physics, and was department chair and at one time Dean of the School of Engineering. Their signature experiment demonstrated the ability of human consciousness to modify probabilities that are treated as random in standard quantum mechanics.

They used voltage fluctuations in a Zener diode to generate random numbers, and asked self-selected experimental subjects to sit in front of a computer screen and use their will to make some function of the quantum-random input higher or lower in each trial. At the end of 800,000 trials, the difference between those in which the subjects intended "high" and intended "low" was over 5 sigma. The probability of this occurring by chance is less than 1 in 10 million. 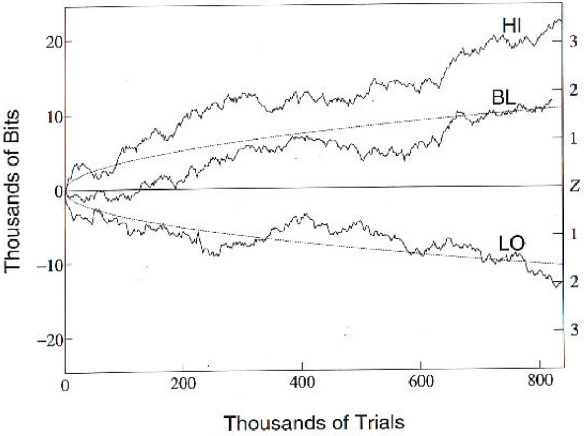 If you believe the result of Jahn and Dunne, it is decisive evidence in favor of paradigm #2.

The results of Jahn and Dunne provide support for #2 here as well, and the Inverse Quantum Zeno Effect provides a mechanism. Kauffman's experiments on quantum criticality in superposition states of neurotransmitters are evidence that the brain is evolved not for maximum reliability (as we engineer computers) but rather for the opposite: maximum quantum indeterminacy at the level of individual neurons.)

Why do so many smart physicists and computer scientists ignore the experiments of Jahn and Dunne? Some don't know about the experiments, which mainstream physics journals have refused to publish. Most assume there must be some mistake in Jahn's methodology, and feel confident enough in their paradigm that they don't judge it a worthwhile use of their time to delve into details of the experiments looking for the error. We should not underestimate the psychological power of cognitive dissonance. Scientists, like most humans, are subject to confirmation bias and herd mentality.

Here are some reasons we should take Jahn and Dunne seriously:

If our commitment to the methodology of science is to have any meaning at all, we have to pay careful attention to replicated findings that contradict our fundamental theories.

Related Topic(s): Consciousness; Physics, Add Tags
Add to My Group(s)
Go To Commenting
The views expressed herein are the sole responsibility of the author and do not necessarily reflect those of this website or its editors.