Political pundits have turned the Democratic presidential primary contest into a NASCAR race. This journalistic tic makes it easy to explain what's happening. But the reality of the still-crowded field is a bit more complicated. That's because one of the candidates in the "progressive" lane is ready to challenge all comers, in all the lanes, including the billionaire lane. In fact, she's coming out of the NASCAR garage with her ears wide open.

So grab a beer and turn on the old flat screen for the Tuesday night Democratic presidential primary debate from Iowa. They'll be plenty of pre- and post-debate commentaries.
Pundits will tell us about Uncle Joe, who remains ahead in the "moderate" lane. Uncle Joe calms us, we'll hear yet again, because he knew how to get things done in the good-old-days. Of course, the political bards will insist, Uncle Joe shows enough progressive leg to tame the liberal beast, but really, really, won't threaten anyone with scarey ideas. The elite political observers will top off their non-endorsement endorsement by reminding us that Biden served as vice president for eight years in the administration of Democratic icon, President Barack Obama.

But look, the commentators will add, Liberal Liz just raced past stormin' Bernie Sanders in the progressive lane. Oh, no, they'll say, Bernie, recovering from a heart attack, pumped his gas peddle to propel him in front of Liz. He even bumped her vehicle -- on purpose? -- forcing Liz to crash against competitors in the moderate and progressive lanes.
Someone who looks and speaks like Chuck Todd will say knowingly that NASCAR Liz also pulled her car into a wine cave to make a pit stop. The Todd-like doll will wonder if Liz did this to shame moderate Pete Buttigieg, back from a distinguished tour of duty in Afghanistan. A more independent-minded expert may add that the former South Bend mayor is hounded by charges that he failed to meet the needs of African-American citizens when he represented them in Indiana.

Viewers will also learn about the latest exploits of a tough-minded Midwestern senator. But that senator, Amy Klobuchar, will compete with simple Bernie Sanders for the most stylish racing attire. She'll no doubt come on stage wearing a snowsuit and gloves. Will she take the gear off before the debate in frigid Des Moines? the cable news hosts will wonder.
Not to be outdone, we'll be directed to check out Bernie. He doesn't back down or pull his punches. Bernie's even taking on snowbound Amy by wearing a helmut with a glowing Democratic Socialist sticker, probably in a nod to AOC.
I've got to give it to them; the well-educated, well-groomed talking heads call a good race. In contrast, I'm an aging white guy who never made much money. I also only earned a high school diploma. This profile indicates I should be a Trump supporter. I am not. I think NASCAR Liz is best positioned to take the race to Presdient Trump.


You heard of him. He lost the popular vote in 2016 but became president because of the "rigged" Electoral College. That's a free college program some folk dead for years created when our country was much different. Trump University failed but the free Electoral College is a gift that can keep on giving. I call it electoral welfare for a New York City con man who now calls the swamps of Florida home.
NASCAR Liz can send Trump cruising down I-95 because there is more to her than Trump and the lapdog, lazy, complicit mainstream media tell us. She was a Republican for at least half of her life. Liz hails from the red state of Oklahoma. She wasn't just a teacher and college professor; Liz also taught Sunday school. She can walk in all kinds of shoes; Liz can listen to and speak with all kinds of Americans.
click here

I started listening to NASCAR Liz after the Great Depression of 2008. She used to appear on Morning Joe to explain why the Congress was keeping an eye on the bailout money we gave the Wall Street crowd that crashed our economy and impoverished millions.

Her comments on Morning Joe remain consistent with what she says now as she campaigns for president. Liz wants our government to work more for us and less for the wealthy, powerful and connected. zabethwarren.com/plans

Don't get me wrong, I like her because her listening skills suggest she can bring all manner of Americans to the table. Yes, the wealthy belong there, too. But they don't get to pick the menu and flick the cable tv gizmo to their channel. We do.
Besides listening, NASCAR Liz has plans, lots of plans. Her plans form a pattern of domestic policy thought; she wants our government to move affirmatively to meet our needs. Her listening skills tell me she will make adjustments if every signle point in every single plan doesn't work. Liz thinks we are ready to move our country forward after several decades of the "Reagan Revolution" and the "Third Way" Democratic doctrine of political survival. 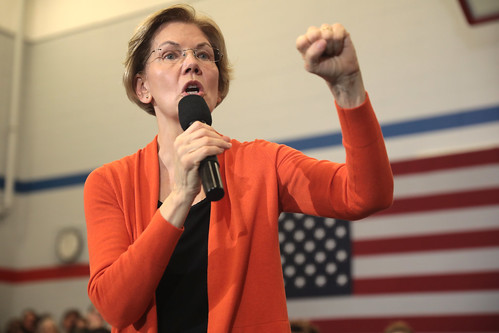 Elizabeth Warren
(Image by Gage Skidmore)   Details   DMCA
We have lived to fight another day, I hear her saying. Let's start pushing for our values, and listening to make sure they work for as many Americans as possible. This recent Washington Post article tells you more about her listening skills, which can form the basis for a united fall campaign.
click here

I've also learned there are some Tulsi Gabbard supporters at OpEd News. They back her for her devotion to progressive policy in domestic and foreign policy. I don't know if her supporters will vote if Tulsi is not on the ballot in the fall. But here are links to two articles that explain Liz Warren's view of foreign policy. click here

Liz has plans. She listens. She can move the Democratic Party and our country forward.

Related Topic(s): Change; Debate; Democratic; Government; Moderate; Money; NASCAR; Nascar Championship; Pundits; Supporters; (more...) Take Back The Democratic Party And America; Take Trump Down; Taking Take Back America; Trump; Work, Add Tags  (less...)
Add to My Group(s)
Go To Commenting
The views expressed herein are the sole responsibility of the author and do not necessarily reflect those of this website or its editors.