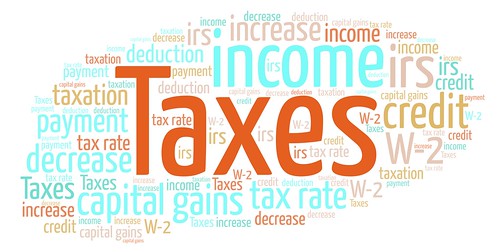 Writing TV commercials was fun but retirement would be heaven. I could do whatever I pleased. I'd get to spend weekday afternoons at Yankee Stadium with the sun shining down on the boys of summer.

Then a new world appeared out of the green. I invested my profit-sharing in the stock market. I discovered that newspapers had business pages as well as sports pages. I puzzled over terms I'd never seen before (such as basis prices, which I'll return to). Looking back I realize this was just the start of an endless tax education.

All federal tax laws are pieces of a giant Rube Goldberg: the Internal Revenue Code, Sections 1 through 9834. Informally called the tax code, it's often called unprintable names by thousands of Americans.

I can't speak to their reasons but I came to have my own. For more than a generation Republicans have promoted the zombie idea that cutting taxes raises revenue and increases investment. It was the perfect cover for stacking the code with provisions that hugely favor the wealthy.

I'd always written for a living. Now I started writing for a cause: tax fairness.

April 13, 2006, was a breakout day. My article about capital gains and basis prices, "One tax tweak that's worth billions", ran in the San Francisco Chronicle. After five-plus years and dozens of rejections, I was finally in print.

I sent that article (and all those since) to the tax-deciding House Ways and Means committee and the Senate Finance committee, to the majority and minority leaders of both houses, to my two senators. Beside writing articles I've testified in writing at Congressional hearings.

Another handout to the haves is a loophole called the stepped-up basis. It allows appreciated assets to be passed along with the appreciation simply wiped away; only post-inheritance gains are subject to taxes.

Imagine how shocked and happy I was when my first cause became law, tucked into the rescue package passed at the height of the 2008 financial crisis. David Cay Johnston made me almost as happy when he mentioned it in one of his books on taxes: "For stocks, mutual funds and bonds... Congress now requires brokerages to report the basis of these investments, a reform wrought partly after my reporting on this issue and the work of others, including Gerald Scorse."

I had another surprise upper just last month. Teresa Ghilarducci's Forbes blog linked to an article of mine and backed the position it took.

So it goes for an adman-turned-taxman, grateful for "the positive psychological benefits associated with a concept now known as mastery: practicing an activity at which you have no previous level of expertise, and experiencing gradual improvement over time".

Related Topic(s): Activist; Congress Republican GOP; Corporate Taxes; Fairness; Finance; Financial; Income Taxes; Reform; Senate; Taxes; (more...) Taxes, Add Tags  (less...)
Add to My Group(s)
Go To Commenting
The views expressed herein are the sole responsibility of the author and do not necessarily reflect those of this website or its editors.