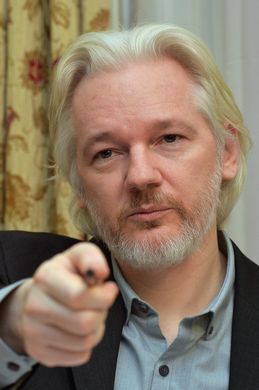 I didn't know what to feel last month seeing Wikileaks founder Julian Assange being hauled out of the Ecuadorian embassy in London like a recalcitrant child misbehaving at a county fair.

After all, this is the guy who, despite his altruistic fervor about journalistic freedom and uncovering the unvarnished truth behind the establishment veneer, ultimately assisted the Trump campaign in 2016 by publishing nearly 20,000 leak ed Democratic National Committee (DNC) emails hours after the Access Hollywood footage of Donald Trump admitting sexual assault broke on television.

Let's not forget former Trump political adviser Roger Stone admitted communicating with Assange, hailing him a "hero," suggesting Assange "could theoretically drop a tranche of documents" before each of the Clinton-Trump presidential debates.

Trump, on multiple occasions, extolled Wikileaks on the campaign trail (before claiming "I know nothing about WikiLeaks. It's not my thing" last month in the wake of the Mueller Report.)

Although not the only culprit, like it or not, Assange's Wikileaks bears some culpability for Trump's current occupancy of 1600 Pennsylvania Avenue.

However, this is the same Julian Assange who published the "Collateral Murder video," footage of a U.S. military helicopter opening fire on civilians in Baghdad in 2007.

This is the same Assange who exposed the Afghan and Iraq war logs that documented myriad mass killing operations in which the American military was engaging.

This is the same Assange who publicized news of the secretive kill-capture task forces, prisoner torture, and the U.S.'s intent to "Iraqicize" forces so they would comply with U.S. occupation objectives to divide up Iraq.

He and other whistleblowers like Chelsea Manning, Daniel Everett Hale, James Risen, Reality Winner, and Edward Snowden are vital to press freedom because they exposed the festering rot behind U.S. foreign and domestic policy the complicit corporate media serves to keep us "patriotic;" i.e., ignorant.

Assange's 18 indictment charges under the Espionage Act are the blatant assault on the First Amendment the administration he helped install is making its stock and trade.

We must not be so shortsighted as to accept Assange's fate as an aberration.

Once that happens, it's all over. We can kiss the free press and freedom of speech good-bye.

Related Topic(s): Assange; Freedom; Indictments; Julian Assange; Publishing; Warning; Whistleblower; Wikileaks, Add Tags
Add to My Group(s)
Go To Commenting
The views expressed herein are the sole responsibility of the author and do not necessarily reflect those of this website or its editors.