The World Muslim Congress is joined by the Institute of Quranic knowledge and Intrafaith Religious Acceptance of Quran, and the Pakistan-American Association of Texas, in condemning the violent act of burning the Hindu Temple in Larkana, Sindh, by an aggressive mob, unfortunately in the name of peace; Islam. 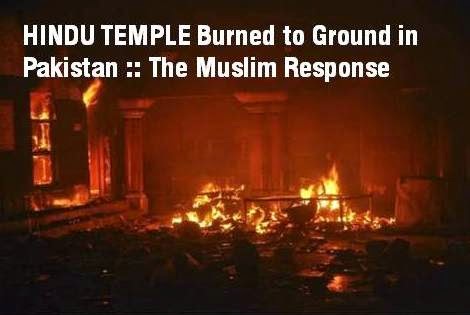 
Reuters reported, "Hundreds of angry Pakistanis attacked a Hindu temple and set it on fire in southern Pakistan overnight following a rumour that a member of the Hindu community had desecrated the Koran, police and community leaders said on Sunday."

As Muslims, we are embarrassed with the acts of these men who acted on their own, and we condemn these acts unequivocally, commented Mike Ghouse, who heads the World Muslim Congress, a think tank in Dallas, Texas.

We do however, appreciate one small ray of hope: "The Pakistani Muslim scholars have denounced attacks on a Hindu temple in Sindh's Larkana district, calling for urgent probe into the incident in which protests against Qur'an desecration turned into violent clashes."

The Muslim majority is deeply concerned about it, and we urge Muslims around the world in general and Pakistani Muslims in particular to create a fund to rebuild the temple that is the least one can do to fellow countrymen. Every society has a responsibility to guard the safety of its minorities, women, seniors, and the children; no one should feel fearful of the majorities. That is the hallmark of civil societies.

Dr. Basheer Ahmed of IQRA and Dr. Amer Suleman of PAAT felt the responsibility to take that first step in building a cohesive Pakistan where every Pakistani feels safe. The least we can do is to contribute towards restoring the Temple. The Pakistan-American Association of Texas is celebrating Pakistan day on March 23rd in Dallas, and has generously donated a booth at the Mela to raise the funds.  All proceeds will go towards restoration of the temple.

We have ways to go; a few among us feel insecure in our faith. God is not going anywhere, Quran will not disappear if someone desecrates or burns it, nor Prophet will be affected by any acts; they have been around, and Alhamdu Lillah they will be there forever.

It is odd that Hafiz Muhammad Tahir Mahmood Ashrafi, the Chairman of the Pakistan Ulema Council (PUC), told The News on Monday, March 17, "Our religion, Islam, preaches peace, love and forbearance," Then he goes on to justify the violence. "However, it is also necessary that the followers of other religions should respect the sentiments of the Muslims." This is disrespectful to Islam's principles of peace.

Prophet Muhammad (pbuh) prayed for those who threw rocks at him on his way to Taif, even Archangel Gabriel offered to crush the miscreants, but prophet did not extract a pound of flesh, nor did he blame the miscreants; he forgave them and prayed for them unconditionally. That is the religion of peace, and that is the model we need to follow.

While law and order brings the situation under control; it does not put off the fires completely. Dying sparks grow and explode again unless they are addressed.

Muslims at large are at fault for allowing the abuse of blasphemy laws in Pakistan, which is anathema to the character of Prophet Muhammad (pbuh), regarded as mercy to the mankind. It is time for us Muslims to mean it, that we the followers of Prophet Muhammad follow the principles of peace he taught us; indeed he was Rahmatul Aalameen - a mercy to mankind. No human should fear us; instead they should feel safe and secure and say it out of their hearts that Muslims are peace-loving people and follow the principles of their prophet.

Do Prophet Muhammad (pbuh), Quran and God need our protection? If we believe that they need our protection, then we are dead wrong. As Muslims, we need to believe in the prophet; he is not going anywhere nor will he be hurt or harmed with any insults.

Islam stands on its own; it does not need our defense, and it is silly to protect God or the Prophet.  They are not weaklings or our property to protect, they belong to the whole universe, don't they?

If they curse the prophet, prophet is not going to be cursed, let us have the strength in our faith and return badness with Good, as he guided us to do; we know all the examples of his work. Can we not be Rahmatul Aalameen to the people of the Alam?

Related Topic(s): Hinduism; Koran; Muslim Fanatics; Muslim Guy; Muslim Speaker; Pakistan; Pakistani Taliban; Pluralist Mike Ghouse; Religion, Add Tags
Add to My Group(s)
Go To Commenting
The views expressed herein are the sole responsibility of the author and do not necessarily reflect those of this website or its editors.