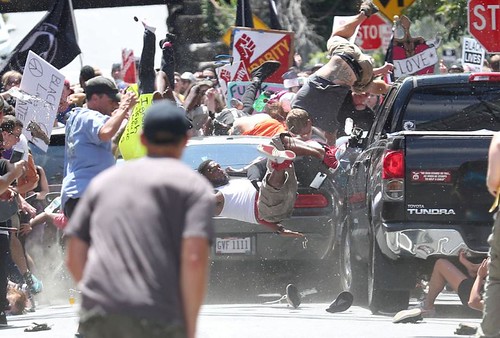 Charlottesville
(Image by follyofreason)   Details   DMCA
What happened in Charlottesville VA is murder. If a Muslim was driving the car, it would be called terrorism. But since it was a white male Christian driver, the mainstream media call it a "clash."

I say this is legalized because a number of states are in the process of attempting to pass laws that protect drivers who crash their cars into protesters. North Dakota and Tennessee attempted to pass such a bill earlier this year but failed. North Carolina appears to be on the path to successfully passing such a bill.

This is incredibly dangerous. If one state allows such a law to pass, it will encourage people in other states, even states without such laws to use their cars as weapons.

It is disgusting that many on Twitter are blaming the victims, saying that if they had not shown up as counter-protesters they would not have been hurt. These people, and I think some of them are sock puppets, but if any are real, they are gutless cowards who criticize people who stand up against hate and injustice.

President Donald Trump also abetted this horrible event by choosing to blame it on "many sides." This was his way of defending the criminals, his way of fomenting more of the same kind of terrorist acts.

Protest is a form of first amendment protected free speech. Any law that allows people to assault protesters and even kill them should be thrown out by the Supreme Court. Any person who uses a vehicle to attack protesters should be treated as a terrorist, whatever their nation of origin or religion.

Related Topic(s): Automobiles; Hate Groups Neo-Nazis; Homegrown Terrorism; Terrorism; White Supremacist, Add Tags
Add to My Group(s)
Go To Commenting
The views expressed herein are the sole responsibility of the author and do not necessarily reflect those of this website or its editors.

STAY IN THE KNOW
If you've enjoyed this, sign up for our daily or weekly newsletter to get lots of great progressive content.
Series: "Bigotry, Racism, Hate, Intolerance"