While the Black Lives Matter movement gains in strength and prominence in the face of continuing police brutality, the health of the most famous Black prisoner, Mumia abu Jamal, continues to decline in a Pennsylvania prison as part of the same policy.[tag] 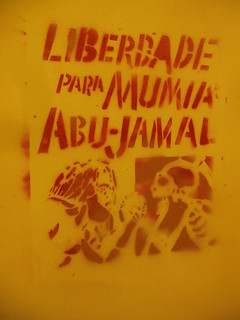 Mumia, as he is familiarly known to Black and white activists alike, was accused of killing a police officer in 1981 and has been in solitary confinement on death row since his conviction in 1982. His supporters insist that Mumia, a former Black Panther, was framed by police. In recent months his health has deteriorated and the prison system has not allowed him to be seen by an outside physician, allowing a normally non-fatal illness (diabetes) to risk becoming lethal. Citing an up-coming re-trial, the prison system has refused to release his medical records.Since his imprisonment, Mumia has become an internationally acclaimed author and radio commentator whose cause is supported by human rights activists around the world https://www.indiegogo.com/projects/mumia-abu-jamal-needs-medical-care-now#/story

Related Topic(s): Author; Brutality; Conviction; Death; Health; Illness; Killing; Mumia Abu-jamal; Police; Radio; (more...) Rights; Strength; Supporters, Add Tags  (less...)
Add to My Group(s)
Go To Commenting
The views expressed herein are the sole responsibility of the author and do not necessarily reflect those of this website or its editors.