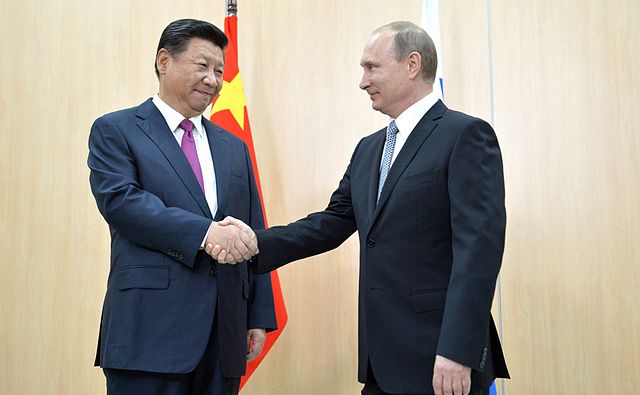 The United States' hegemonic dominance in the world is heading to the exits. The decline in US unipolar power has been underway for several years, in line with the emergence of a multipolar world. This week, Russia and China showed important resolve to face down American bully tactics over North Korea. The confrontation suggests a turning point in the transition from American world dominance to a multipolar one.

US President Donald Trump reiterated the possibility of military attack on North Korea while in Poland this week. This was also while Washington was hectoring China and Russia to join in a tougher response to North Korea over its ballistic missile launch days before -- the former two nations themselves having recently been sanctioned anew by the US. Talk about American audacity and double think.

However, the crass arrogance shown by the US seems to have hit a new limit of tolerance in Moscow and Beijing. Both are beginning to demonstrate a loss of patience with the bumptious, insufferable Americans.

But Russia and China's stance this time to the Americans had significantly stiffened. Both explicitly warned the US against taking military action against North Korea.

Moreover, Russia and China said that they would oppose Washington imposing further sanctions on the government of Kim Jong-un. The latter has already been subjected to six rounds of US-led sanctions.

In short, the American bully is finding that it is no longer able to dictate its unilateral way.

Addressing an emergency session of the United Nations Security Council, the Russian and Chinese ambassadors rejected the shrill American call for global action to a global threat. Russian envoy Vladimir Safronkov stood firmly with his Chinese counterpart, saying that threatened American military action was simply not an option, and that a different policy was needed from the failed American one of slapping ever-more sanctions on North Korea.

One can imagine the exasperation felt within Washington of being bluntly told no to its invariable, self-anointed belligerence.

The alternative route being proposed by Russia and China was the radical one -- radical from the American point of view -- of diplomacy. It has perhaps taken the Russians and Chinese overdue time to reach this point. But what is remarkably apparent now is that they are asserting themselves against the US with increased confidence. And what they are asserting in this case is an eminently reasonable solution to the Korean crisis. They are calling for a freeze on Pyongyang's nuclear weapons program in conjunction with the US freezing its constant military exercises on the peninsula, as well as withdrawing its anti-missile THAAD system. The next step is to then hold multilateral negotiations for a comprehensive peaceful settlement, without preconditions.

Such an eminently reasonable approach is anathema to the Americans. Because it negates their unilateral arrogance and self-righteousness to dictate terms.

This is a significant development, one that portends a new determination by Russia and China to confront the American bully head-on. For too long, Washington has gotten away with outrageous aggression, lawlessness, hypocrisy and absurd hubris, not just over Korea but on countless other international issues. On the world stage it behaves like a schoolyard bully, or perhaps more accurately that should be a street thug. Going around beating up other people, usually the weak, as it likes. Then when Washington feels particularly affronted about some perceived slight, it invokes international law and righteousness.

This week, what we saw over the North Korea missile launch and the typical American over-reaction was Russia and China saying to Washington: your days of self-licensing aggression and abusing international law are over; your American unipolar hegemony is redundant.

Welcome to the multipolar world forged largely by Russia and China where all nations must abide by international norms and law, principally the paramount pursuit of diplomacy.

Related Topic(s): Arrogance; China Politics; China Russia Alliance; Korea, Add Tags
Add to My Group(s)
Go To Commenting
The views expressed herein are the sole responsibility of the author and do not necessarily reflect those of this website or its editors.