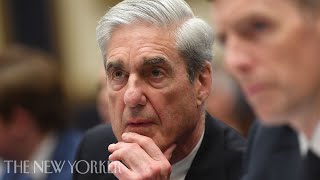 Donald Trump keeps trying to hypnotize people by saying "no collusion, no obstruction," and saying that Robert Mueller exonerated him. Because so few Americans and so few in Congress will actually read the Mueller report, he thinks he can get away with the big lie.

Mueller explicitly denied yesterday that he had exonerated Trump. So that's a Trump lie.

Although Rep. Ted Lieu, D-Calif., did not in fact elicit from Mueller, as Alex Ward at Vox showed, an admission that he had decided on Trump's guilt but did not indict, Lieu carefully walked Mueller through the report to establish fairly conclusively that Trump committed what any reasonable person, knowledgeable of the law, would conclude was obstruction of justice:

Lieu demonstrated from the Mueller report that all three elements of obstruction of justice were committed by Trump when he told White House counsel Don McGahn to fire Mueller and then told McGahn to cover up the order (which was not implemented).

LIEU: Thank you, director Mueller, for your long history of service to our country including your service as a Marine where you earned a brown star with a V device.

LIEU: OK. I'd like to direct you to page 97 of Volume 2 of your report, and you wrote there on page 97, quote, "Sessions was being instructed to tell the special counsel to end the existing investigation into the president and his campaign," unquote. That's in the report, correct?

LIEU: That would be evidence of an obstructive act because it would naturally obstruct their investigation, correct?

Related Topic(s): Collusion; Crime; Mueller Investigation; Mueller Report; Trump Hypocrisy; Trump Russia Connection, Add Tags
Add to My Group(s)
Go To Commenting
The views expressed herein are the sole responsibility of the author and do not necessarily reflect those of this website or its editors.