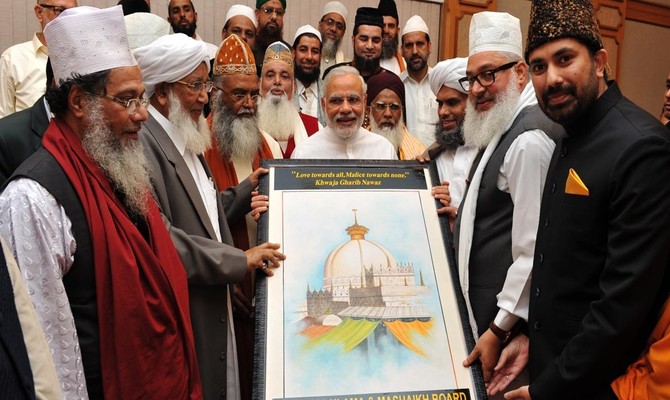 Yes, that's what ABP News' Rubika Liyaquat asked the Prime Minister in an interview (54:00): "Modiji, why Indian Muslims are not able to trust BJP? What is Narendra Modi's 'rishta' (relationship) with India's Muslims?"

Simple. Straight. From one of the rising anchors of Indian TV news industry.

"Today when I say there would be no Indian who wouldn't have a house of brick and mortar by 2022; when I say I have given electricity to each house, then I don't look at what's the demography. It's for everyone."

There are a few other questions that Indian Muslims have in mind and which Rubika Liyaquat didn't ask. Questions that my own Muslim friends, who easily outnumber my Hindu friends, haven't asked me but I sense hold against me and my beliefs. So let me guess the question they would ask and the answers I would give. It's important for there are millions who are on either side of the divide. Open dialogue improves understanding and India can't do with just one viewpoint and ideology. It may also make Indian Muslims pause and think before they vote in the Lok Sabha polls this week. So here I go:

From lynchings to restriction on beef, Muslims are on target

I would neither deny nor confirm it. I am not sure if Muslims are not getting beef on their dinner table. As for lynchings, it's reprehensible. But it's not as if it didn't happen before 2014. Or, if Hindus weren't lynched in last five years. Hindus or stray voices in BJP as a whole can't be held to account as all Muslims can't be held to account because of Islamic State (IS). As for BJP, the condemnation came from no less than PM Modi: "Unko mat maro, himmat hai to mujhe maaro (Don't kill them, if you have the courage, kill me)."

If Indian state uses a strong in hand in Kashmir, it's not against Muslimsit's against terrorists. It's against a communal agenda. No rights of Muslims have been taken away under Modi government which is enshrined in the Constitution.

BJP neither gives tickets to Muslims nor looks after them

It's BJP which made APJ Abdul Kalam the president of India. India's last Census (2011) revealed that 43% Muslims are illiterate; only 2.75% finished graduation; 25% Muslims in 6-14 age bracket never attended school or dropped out (Sachar Committee, 2006). Today Modi government is modernizing "madrasa" education so economically weaker Muslim children are better equipped for better jobs. There are financial incentives for Muslim girls; legal reforms on "triple talaq" and air-tickets for Hajj travel have been reduced from Rs 97,000 to Rs 20,000. It's helping stranded Muslims in Pakistan to return home safely (case in point: Uzma Ahmad and Mohammedi Begum).

Triple Talaq might raise the ire of fundamentalist forces among Indian Muslims but look at the benefit it could accrue to Muslim women and how much it could help the nation. Women, for instance, constitute 45% of United States' GDP; 39% of China and 34% of Africa.

Contrast this with Congress. It's a misnomer that Congress gave Muslims a higher representation in Lok Sabha elections. It fielded only 27 Muslim candidates in the 2014 general elections. Very few Muslims were given tickets even under Jawaharlal Nehru and Indira Gandhi. If today Indian Muslims are backward today, a lot of blame must go to Congress who ruled for most of independent India's 72 years.

RSS is a known Muslim-baiter

Wrong. Stray comments from former Sangachalaks, which they renounced in doubly quick time, can't be held against them. RSS has a Muslim wing, Muslim Rashtriya Manchwhich, which has over 10,000 members. They don't ask about your religion when you fill the form for RSS membership. They speak about "Akhand Bharat". They want Indian citizens to respect the "nation" above the narrow binary of "caste and religion." No gathering in any RSS shakha propagates anti-Muslim agenda.

Related Topic(s): 2014; Gandhi; History; Ideology; Media; Modis First Speech; Mosque; Muslims; Politicians; Quran; (more...) Religion, Add Tags  (less...)
Add to My Group(s)
Go To Commenting
The views expressed herein are the sole responsibility of the author and do not necessarily reflect those of this website or its editors.