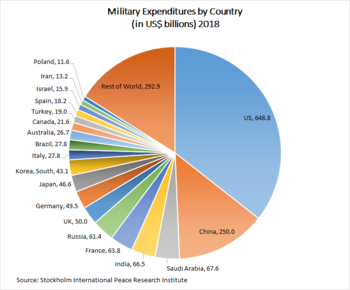 Something very unusual happened on Thursday, Oct. 17. The New York Times suddenly ran an article on its opinion page explaining how to cut $300 billion from the $1-trillion military budget - enough, the article explained, to fund Bernie Sanders' proposed program for an expanded Medicare program to cover all Americans without raising a dime in new taxes.

The article, written by Lindsay Koshgarian, director of the Institute for Policy Studies' National Priorities Project , explained that by shifting the US diplomatic and military strategy from one of confrontation, endless wars, expansive overseas basing, and unilateralism to one of diplomacy, a pull-back from foreign bases and global deployments, with a concomitant reduction in the nation's 2.4 million-person military could be accomplished with no threat to US national security.

Koshgarian's opinion article actually listed the cuts that could be made, attaching a dollar value to each one. Examples were:

* End the practice of supplemental appropriations for war funding, much of which is actually used for more spending on other unintended military programs and which have only led to unending wars that have done nothing to make the US safer, for example in Iraq and Afghanistan. Savings: $66 billion per year.

* End funding for other nations' militaries. Savings $14 billion a year.

* Close foreign bases (Almost one-third of all uniformed US military personnel serve abroad, most of them in non-crisis-zone locations or combat zones). Savings: $90 billion

* Cancel nuclear programs. The US has 1550 or more operational nuclear weapons - enough to destroy any enemy, and indeed the whole globe -- yet at the end of his second term before leaving office, President Obama signed a bill launching a 10-year $1.7-trillion program to "modernize" and upgrade the US nuclear arsenal. It is a completely unneeded and destabilizing program certain to trigger a new global arms race. Immediate savings from eliminating this program: $43 billion a year.

* Cancel pointless weapons programs from the F-35 and F-22 to new Navy destroyers and aircraft carriers. These are all weapons that will never be used in any war against the US as all such wars, experts agree, would almost instantly go nuclear. Savings: $57 billion.

Just these five areas of cuts alone would save a total of $270 billion. The remaining savings in the IPS study came from smaller cuts, such as the $9 billion for Trump's Mexico border wall.

The surprise isn't that there are enormous savings to be had by ending America's imperial military and slashing its extravagant annual budget, which by one reckoning done by the Project on Government Oversight's Straus Military Reform Project is actually now closer to $1.25 trillion a year. It's that this opinion piece by Koshgarian is the first time that a major US news organization has published an article detailing how vast that spending is, and how useless and damaging to US society it has become. The Times in fact, has long been a cheerleader for more spending to confront alleged "threats" that its own news pages have fraudulently inflated over the years. These bogus scare stories have ranged from "missile gaps" to "Russian aggression in Ukraine," to "NATO weakness" to Saddam Hussein's "weapons of mass destruction," etc.

But Koshgarian is the first to admit that her article really didn't tell the whole story. She explains that space limitations imposed by the Times opinion page prevented her from expanding on the point she was making.

"The US military budget could actually be cut much more without harming US national security," Koshgarian said in an interview with ThisCantBeHappening! Her study, for example, suggested cutting some 200,000 to 220,000 US military personnel through closing bases and ending interminable US-launched wars and interventions in the Middle East and other parts of the world. Actually though, the number of US troops based abroad is double that figure, and virtually all of those soldiers, sailors, pilots and marines, perhaps with the exception of marine embassy guards, could be brought home, and US troop levels could be reduced by that amount. As well, she agreed, the US, has some 900,000 active-duty uniformed personnel based in the domestic US. That's a number greater than the China's People's Armed Police, the domestic troops that country's dictatorship uses to control its 1.4 billion people. What are America's domestic troops, and the top heavy officer corps above them, doing? On top of that, the US has another 1.1 million reservists and National Guard personnel in country, plus another 861,000 civilian employees. Altogether we're talking about a military of 3.26 million people - almost as many as the 3.68 million the US had in 1942!

Clearly the Pentagon could cut its domestic military payroll by a staggering amount. Since the military payroll accounts for about one-quarter of the annual Pentagon budget, that cut alone would produce an annual savings of some $250-$300 billion.