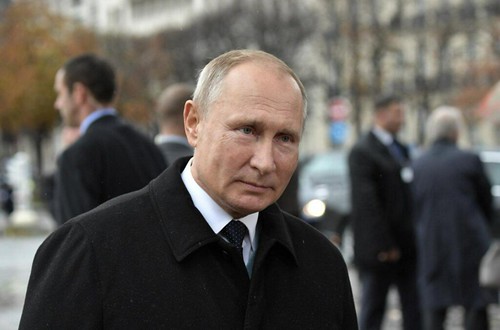 By Robert Weiner and Adjanni Ramos

The new Director of National Intelligence (DNI) has just issued a report asserting definitively that Russia committed "active threats" against the 2020 election with actions "denigrating President Biden's candidacy." Unfortunately, then-Senate Majority Mitch McConnell did nothing about it. Mitch McConnell's pro-Russia connections are real. It's time for investigations by federal, state, and congressional authorities and committees, as well as the media.

Despite serving the critical role of Senate Majority Leader at the time, Sen. Mitch McConnell (R-KY) did not congratulate President Biden on his 2020 Electoral win on November 3rd, until the morning of Tuesday, December 15th, waiting for Russian President Putin, who congratulated Biden via telegram the night before (around 3 AM Eastern Time), to congratulate him first. He also waited until Biden was president to begin opposing Trump's ideology publicly and voted to protect him from impeachment despite his now-famous statement afterward making it seem like he opposed Trump from the outset.

In 2019, following the release of the infamous Mueller report and ahead of Special Counsel Robert Mueller's testimony with regards to Russian interference in the 2016 US Elections, Sen. McConnell blocked four separate attempts (May 16th, 2019, June 24th, 2019, June 28th, 2019 and June 29th, 2019) to introduce an election security bill to better prevent outside interference in future elections. Mueller warned that the Russians were expected to interfere in the 2020 US elections, in which Sen. McConnell and then-President Trump were running.

McConnell repeatedly opposed several bipartisan security bills because they were "partisan," such as the DETER Act (blocked June 26th, 2019) which was co-written by Sen. Lindsey Graham (R-SC). Then, following an op-ed released in the Washington Post on July 26th, 2019, where McConnell was called a "Russian Asset," MSNBC host Joe Scarborough (R) branded the Senator "Moscow Mitch."

In his book The Apprentice: Trump, Russia and the Subversion of American Democracy, Pulitzer prize-winning reporter Greg Miller described one instance in which McConnell expressed a lack of alarm to Russian interference in his country's elections. In the fall of 2016 - after two days spent sequestered in his office - CIA Director John Brennan contacted McConnell and told him of the mounting evidence regarding Russian interference in the upcoming election, to which McConnell responded: "You're trying to screw the Republican candidate." He was ready to call out Brennan and Obama, but not Russian President Vladimir Putin.

Craig Bouchard, the CEO of Braidy Industries, looked to build a $1.7 billion Aluminum Plant in Ashland, KY, in 2018. To do so, Bouchard needed investors and primarily United Co. Rusal, a Russian-owned Aluminum production company, under sanctions from the US Government. Len Blavatnik is a Ukrain-born, Russian raised, dual citizen of both the U.S. and the U.K. He co-owns 26.5% of Rusal and is a former business partner of Oleg Deripaska - CEO of Rusal, Russian Oligarch, and a close friend of Russian President Putin.

Following a 2018 investigation into Deripaska's relationship with Trump campaign manager, Paul Manafort, and possible Russian meddling in the 2016 elections, the US Treasury Department placed sanctions on Rusal and Deripaska himself, making Rusal's investment in Ashland impossible, unless there was political intervention.

Unsurprisingly, McConnell became a key player in lifting the sanctions placed upon a company looking to invest in his home state. Although McConnell did not lift sanctions on Deripaska himself, Rusal would still own 40% of the plant and Lord Gregory Barker (a close aide of Deripaska and lead lobbyist against the sanctions) would co-chair the Plant. This allowed Sen. McConnell to take credit for creating new jobs in his home state. This would also create a profit for Blavatnik, who previously donated $1.5 million - $1 million on December 8th, 2015 and $500 thousand on April 26th, 2016 - to McConnell's Senate Leadership Fund during the 2016 elections.

McConnell is an intelligent political leader, whose foresight had previously gotten him the Senate Majority Leader seat. Arguably, he voted to lift sanctions because he supported the administration's choice to oppose sanctions on Russian Oligarchs. But rather than claiming he knew nothing of Russian investors and defending his reputation, McConnell chose to enable the president's claims, knowing full well most were untrue.

In 2008, McConnell received a gift from his father-in-law, James Chao (who had close relations with former Chinese President Jian Zemin) which boosted his net worth to $20 million. Then in true "Trumpian" form of diverting Russian blame to China, Trump put out a statement about McConnell in his February 16 tirade about McConnel's post impeachment trial comments blaming Trump for the Capitol insurrection. "McConnell has no credibility on China because of his family's substantial Chinese business holding," Trump alleged, making no mention of his own conflict of interest with Russia.

McConnell waved this apparent financial conflict without considering the long-term effects it would have on his home state. By lifting sanctions, McConnell gave an individual still under investigation for meddling in the 2016 U.S. elections a stake in a major Kentucky factory.

Sen. McConnell has revived his apparent loyalties to Trump, as the former President teases his return to politics - saying he would "Absolutely" support Trump if he were the party nominee - to regain his strong-arm over the GOP to remain a credible Republican leader.