The Republican Party is currently attempting to cement a position of permanent electoral-minority (see the make-up of the Senate in relation to population) control of government at the state levels in as many States as possible, and through that control at the national level as well. In this process it is becoming more-and-more openly racist, in its electoral strategy, its rhetoric, and its increasingly virulent attempt to control the national dialogue about race and racism and how they have influenced the history of this country since its beginnings, before it was a country. Of course, as I have pointed out in a previous column, the Republican Party did not become racist overnight. In fact, as I said back then, in terms of the xenophobia (a form of racism) that is in what I have termed the DNA of the Party, with the incorporation of the American Party (commonly known as "The Know-Nothings) into it from the beginning in the 1850s, it has been there from the beginning. 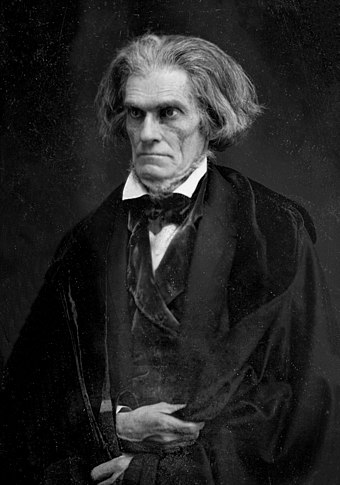 John C Calhoun by Mathew Brady 1849. This photograph was taken in the year before Calhoun died. It is not know whether he ever smiled.
(Image by Wikipedia (commons.wikimedia.org), Author: Mathew Brady  (1822–1896)    )   Details   Source   DMCA

As is well-known, it was the "Southern Strategy" of Richard Nixon (1969) which first pointed the Party in the direction of anti-Black racism, charging into those Southern electoral grounds that the Democratic Party had left when it took up the cause of civil rights in the 1960s. And then it wound through the "welfare queen" sloganeering of Ronald Reagan to the birtherism and clearly racist border "policy" of Trump. But it has now taken another turn, further downwards into the pit from whence it came with the open attack on Black (and to a certain extent Latinx) voting that has arisen in Trump's "the vote was stolen from me" campaign and the now concurrent assault on Black voting (and other minorities too, but most especially Black) that, as is well-known, is being undertaken in numerous states across the country.

With the passage of H.R. 1, "The For the People Act," by the House of Representatives, now known as S. 1 in the Senate, the battle has been joined. For, as is well-known, it is very clear that in a majority of the states the Republicans have introduced, and in some cases have already passed, legislation that is clearly aimed at cutting down on the number of Blacks (and other minorities, like Native Americans) voting. They have been after doing this for quite some time. For example, as I illustrate in my 1996 book "The 15% Solution ," the modern version of this strategy was originally conceived in 1989 (if not even earlier).

It is fascinating how, since the time of the adoption of the XIVth Amendment during Reconstruction, which gave the vote to freed Black former slaves, there has been a singular focus by right-wing forces in this country to suppress the Black vote. The Ku Klux Klan was originally founded to undertake that task, using terror to do so. (One of the founders was a former Confederate General named Nathan Bedford Forrest, of whom a few statues are still left in the South, who before the Civil War was an active slave trader in Memphis, TN.) Then, as is well-known, came "Jim Crow" and etc.

Since it is a state-by-state effort, one would think that there could not possibly be a national leader of it, other than Donald Trump. But Trump is becoming more-and-more a side-show for the Republicans. As I pointed out in a recent column, he is becoming more-and-more simply the head-lamp on the onrushing train of Republo-fascism. Trump is not a party leader, especially for a party out-of-power, at least in the Executive Branch. He is more like a carnival barker, shouting the same slogans over-and-over again, stirring up the crowd which is just waiting to hear them, over-and-over again. He of course attracts a significant number of people to his barking. But after the failure of the core of the racist-Trump-grouping to overthrow Constitutional government in the January 6th Insurrection, in my view Trump has indeed become a literal side-show.

Republican leadership still kisses the ring, but Trump is no longer where the action is, in politics and more especially in policy. Congress and the state governments are where the leadership, like Abbott in Texas and Kemp in Georgia (who got the Governorship there only by racially manipulating the vote in 2018), is, to get control of the latter permanently (389 such bills by the end of May). At the same time, it is the Republicans in Congress who are maneuvering frantically to make sure that there is no Federal interference --- like S. 1 --- with that process. And who is the leader of the latter process, the process that really counts in formally establishing Republican minority government across the nation for as far as the eye can see? Why the man who very openly does not kiss the ring of the Barker.

In fact, Mitch McConnell made one of the strongest, most condemnatory-of-Trump, speeches after the Trumpsurrection of 1-6-21. But of course, that did not lead Mitch to either vote for impeachment or agree to the establishment of Commission outside of the Congress to examine the events of that day and those that led up to it, for reasons that I have previously discussed. Contrariwise, Mitch is now well on his way to becoming the John C. Calhoun of the current Senate. For the period which eventually led up to the Civil War Calhoun was the strongest defender of the institution of slavery (and owned slaves himself) in the Federal government. And he also knew every trick in the book of Senate rules to make sure that the institution could be effectively protected and, when possible (as in the California Compromise of 1850, which effectively opened up the then-Western territories to slavery, which in turn became of the main causes of the Civil War).

And so here comes Mitch McConnell. We don't know whether McConnell is personally racist (as was Calhoun). But that point is irrelevant. What we do know is that a) like Calhoun he knows every rule in the extensive and dense Senate rule book, b) he is particularly concerned with preserving the filibuster which, of course, permits, in fact encourages, the use of minority rule in the Senate, and c) his prime targets at this time are the protection of all of those state laws which are intended to limit the Black vote, as well as those Federal laws and programs which are specifically designed to address the racial disparities, and indeed the racism, which have characterized this nation since its beginnings before there was a Nation. This latter fact has been understood for decades, as W.E.B. DuBois illustrated in "Black Reconstruction," published in 1934. Of course, currently it has been laid out in great detail in the "1619 Project" of Nikole Hannah-Jones.

To repeat, John C. Calhoun stood in the Senate Door and did everything he could, using the rules of the Senate, to prevent and deflect any attacks on the institution of slavery. It happened that the conflict became even more intense during the 1850s, following his death in 1850. And now here is Mitch McConnell, in my view a modern John C. Calhoun, mobilizing the Senate rule book and taking it into battle (much as Winston Churchill was said by the great journalist Edward R. Murrow to have mobilized the English language and taken it into battle, when Great Britain stood alone against the might of the Nazis following the Fall of France in June, 1940).

Of course, Calhoun's work eventually led to the Civil War. It remains to be seen whether McConnell's will lead to the Second of those.

Addendum I: Using the Study of Racism to Promote Racism. The study of the role of racism in the history of the United States and its predecessor English colonies (that is, for example, what Critical Race Theory [CRT], dating from the 1970s, and the 1619 Project, dating from 2019, along with many other similar studies going back to W.E.B. DuBois' 1934 classic Black Reconstruction, have done), in the voices of the racists become themselves "racist" precisely they because they illustrate the role of racism in U.S. history. (Parse that sentence, folks.) Doing that, of course, is precisely what CRT et al are/were intended to do, and indeed do do. And that is precisely why the racists in the Republican Party and the Right-Wing Commentariat are so viciously attacking CRT, and attempting to label it "racist." Just another WMD --- Weapon of Mass Distraction --- that they have used so widely, and unfortunately so effectively, for so many decades.

Addendum II: Discussing U.S. Racism and the Use of C.R.T. to Examine it.

The Opinion Page of The New York Times of June 29, 2021 contains a fascinating example of the breadth of discussion of C.R.T., with three essays. In her column, "A Maddening Debate Over Race Theory," Michele Goldberg undertakes a careful critique/analysis of how C.R.T. is being used in primary and secondary education. One point she makes is that C.R.T. critics on the Right often cherry-pick "bad" examples of its use and then smear the whole system of analysis with them. Which is precisely what Bret Stephens does in his column "New Racism Won't Fix Old Racism." But then these two are crowned by Paul Krugman's column "The Right Goes All in On Ignorance," which discusses the current Attack-on-the-Attack-on-Racism that underlies the whole of the current Right-wing-Racist strategy in the United States. All in one place. As I said, fascinating.

Steven Jonas, MD, MPH, MS is a Professor Emeritus of Preventive Medicine at StonyBrookMedicine (NY) and author/co-author/editor/co-editor of over 35 books. In addition to his position on OpEdNews as a "Trusted Author," he is a Senior Editor, (more...)
Related Topic(s): Critical Thinking; Domestic Terrorism; Donal Trump Hate Speach; McConnell-Mitch; Mcconnell Grim Reaper For Green New Deal; Race African American Black Negro; Republican; Slavery; Trump Racist; US Confederacy, Add Tags
Add to My Group(s)
Go To Commenting
The views expressed herein are the sole responsibility of the author and do not necessarily reflect those of this website or its editors.