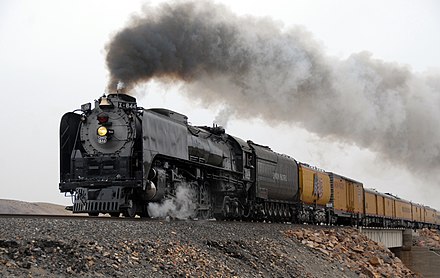 A Union Pacific train, pulled by one of the last steam locomotives. The UP was the first completed trans-continental railroad; a product of the Whig-component of the then-new Republican Party. It doesn't do this sort of thing anymore.
(Image by Wikipedia (commons.wikimedia.org), Author: 04_15_09_162xp_-_Flickr_-_drewj1946.jpg: Drew Jacksich from San Jose, CA, The Republic of California derivative work: Bruce1ee)   Details   Source   DMCA

My OpEdNews column of last week was entitled: "The Oncoming Freight Train of the Republo-Fascist Party: With a Disposable Headlight Named Donald J. Trump." It got a thousand-plus hits (which is a lot for me). It also got an unusually large number of comments (again for me). They generally fit into four categories: "like your writing," "your warnings must be taken seriously," "U.S. capitalism has many faults," and "but what-about-Biden?" As for the first group, "thank you." As for the second, I will get back to them. As for the third, let's consider them for a moment. (Then we will get to the fourth.)

Indeed, U.S. capitalism, like capitalism throughout history and 'round the world, does indeed have many faults. Which do not have to be retailed here. But, as I and many others have written for decades, capitalism from the 20th century onwards has in general had two forms of governance: some form of "liberal" or "bourgeois" parliamentary democracy, or some form of authoritarian/fascist/pseudo-parliamentary-democracy (see contemporary Hungary. Which is interesting for the first state system which can be categorized as "fascist" was formed in Hungary, under Admiral Miklos Horthy, in 1919.)

Indeed, as I have said elsewhere, in dealing with natural resources and global warming alone, capitalism is leading itself to suicide, and is taking the human species (as well as a large number of others) with it. As I said in summary in the referenced column:

"And so, [giving credit for the question, to whom it is due] what is to be done? There is of course hope. While it may be too late to slow carbon emissions down enough to prevent reaching the 'tipping point,' as some scientists (quoted above) think, it may very well be possible to develop a series of environmentally safe methods for capturing carbon and methane, shielding the earth from the increasing heat levels, and so on and so forth. It is definitely possible to institute economic planning on a massive scale to conserve and re-use natural resources that will otherwise run out. But that will require the replacement of capitalism with some form of socialism.

"What form that system might take and how we will get there are matters for further consideration. But given historical experience and an analysis of how capitalism has dealt with the socialist experiments that have come along so far (see, e.g., The 75 Years War Against the Soviet Union), we will not get there spontaneously, we will not get there without the formation of a series of leading parties, around the world. If that series of events does not occur, then indeed capitalism will commit involuntary suicide with disastrous results for ours and many other species. It will indeed vault us into a full-blown 'Sixth Extinction'. "

Why do I repeat that thought here? Because it is a future with which all of us have to be concerned. And in my view, it is a future which will be impossible to avoid if the governance system for the United States, the world's leading capitalist power, becomes fascist (whether or not, as one commentator stated, the nation "deserves it.")

Next, there were several commentators who believe that the contemporary Democratic Party in general and Biden in particular are not suited for the battle against the Republo-fascists, especially because of the imperialist foreign policy which has been part of the Democratic Party's center since the end of the Second World War. Indeed, it has been so since Truman went back on his agreement with Stalin at Potsdam (1945) that the Soviet Union would be invading Japan on August 8 of that year. (This too is a topic on which I have written extensively over the years, as in my analysis of "The 75 Years War against the Soviet Union.") It is hard to believe that any U.S. government, Democratic or Republican, would give up on U.S. Imperialism, although it certainly has been and will be modified in form and content over time (e.g., see the Biden withdrawal from Afghanistan, widely criticized in many quarters). Thus, that does not mean that a fascist government will come to the United States just in order to maintain the U.S. as an imperialist power.

Then we come to the point made by one commentator about "not voting Democratic," which in terms, right now, of the oncoming freight train is the most important one for consideration. First, as is well-known, under capitalism, in those nations which have been ruled by some form of parliamentary democracy since the end of the 19th century, in most cases there have been two parties. Both represent sectors of the ruling class. One thinks the best way to maintain power is through a variety of repressive measures, while the other thinks that a share-the-wealth-provide-certain-basic-services-of-reasonable-quality-and-now,-a-take-care-of-the-environment approach, is better. In the case of the U.S., of course, since the end of the 18th century, the two-party-system-based government has existed in a peculiar form that first was based in part on the institution of slavery, followed by the pseudo-slavery "Jim Crow" in the South and its progeny which have sprouted up all over the country, and now one in which one of the two leading parties actually runs on racism/xenophobia. And that is the Party which in my view, as stated (with references there) in the previous column, is racing down the proverbial track towards fascism.

As for the Democrats, just like the Republicans, over time they have hardly been monolithic. For the latter, as referenced just above, they have been xenophobic since their beginnings in the 1850s. They Repubs. became openly racist only under Richard Nixon and his "Southern Strategy." The Democrats were the racist party until the time of the Civil Rights Movement in the 1960s. But once the Republicans left their Whigish "government should do stuff" origins behind in the 1870s, the Democrats have essentially taken that role over. Except for the Clinton-Gore-Obama Era of the Democratic Leadership Council and "let's be as much like the Republicans in policy as we can without appearing to be so if we can help it." Which has lasted down to now. And Joe Biden was certainly part of it. Down to, it would seem for him also, until now.

The raft of legislative proposals that he has introduced or will be introducing sound like the New Deal, sometimes the New Deal on Steroids. (How much of a chance he has of reaching his goals, which, as is well-known, would have been much, much better had the Democrats been able to pick up Maine and North Carolina in the Senate, is another matter.) So, I don't think that it is helpful to describe Joe Biden and the current multi-ethnic Democratic Party as "fascist."

As for the argument that my argument is simply that "the Republicans are really, really bad," in my view it misses the point. First, the current Democratic Party is different from both the Repubs. and its own "the Era of Big Government is Over" recent past. Second, and perhaps more importantly, as I have written now, over and over again for years, the Republican Party is by definiton (see below) becoming fascist (hence their new name, the Republo-fascist Party). (Of course, one does have to note that there are observers who think that is no difference, except in form.) So, let's take a look at the shorter version of the definition of fascism that I use (yes, it is the shorter one):

"There is a single, all powerful executive branch of government, in service of a capitalist ruling class that controls for the most part the functions of production, distribution and exchange. There is no separation of powers [one of James Madison's signal contributions to the then-unique form of government established by the Constitution]. Thus, there are no de facto independent judicial or legislative branches, at any level. There is no independent media. There is a single national ideology, based on some combination of racism, misogyny, religious bigotry and authoritarianism, homophobia, and xenophobia. There is a state propaganda machine using the big and little lie techniques. There may be a full-blown dictatorship, a charismatic leader, engagement in foreign wars, and the use of the mob/private armies."

Steven Jonas, MD, MPH, MS is a Professor Emeritus of Preventive Medicine at StonyBrookMedicine (NY) and author/co-author/editor/co-editor of over 35 books. In addition to his position on OpEdNews as a "Trusted Author," he is a Senior Editor, (more...)
Related Topic(s): Donald Trump; Donald Trump Racist; Trainwreck Trump; Trumpism, Add Tags
Add to My Group(s)
Go To Commenting
The views expressed herein are the sole responsibility of the author and do not necessarily reflect those of this website or its editors.