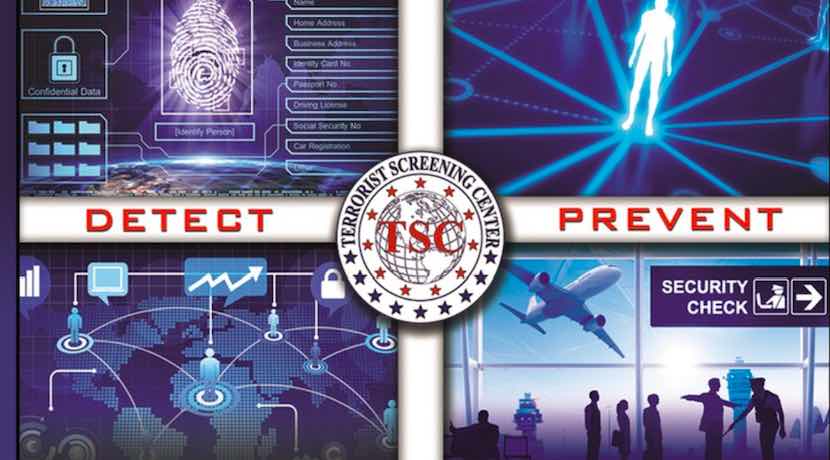 Image of the homepage of the FBI's Terrorist Screening Center
(Image by fbi.gov/about/leadership-and-structure/national-security-branch/tsc)   Details   DMCA

I have something in common with some of the brownshirt thugs who assaulted the Capitol, some reportedly intent on kidnapping and/or killing congressional leaders and members like House Speaker Nancy Pelosi, Senate Minority Leader and presumptive Majority Leader Chuck Schumer, Alexandria Ocasio-Cortez and Vice President Mike Pence.

No, I'm not a brownshirt fascist. I'm a politically leftist professional journalist, a former Business Week correspondent, winner of a 2019 "Izzy" award for Outstanding Independent Journalism, a Graduate of the Columbia Grad School of Journalism and a two-time Fulbright Scholar in Shanghai and Taiwan.

What I have in common with some of the thugs who engaged in an act of insurrection or sedition in a violent assault on Congress on Jan. 6 that led to the deaths of five people and brought Congress to a halt and had its members holed up in safe rooms in the Capitol basement is that like reportedly dozens of these white nationalist fascists, I am and have since at least March 2019, been on the FBI's Terrorist Watch List.

We Americans (unless we're Muslim or have Arabic names) don't hear much about that Watch List normally unless there's a plane hijacking or a terror bombing, but the FBI, during a federal court case last year disclosed in the course of discovery that the list (three lists, actually including a "No Fly List" of people who are banned for boarding aircraft), established in the wake of the 9-11 attack in September 2001, currently contains over a million names. Most of these are not rightist terrorists or journalists. They are people with Muslim or Arab-sounding names, often very common names like Muhammad or Jamil, who have the misfortune of owning the same name as someone who may have committed or knows someone who, or someone who knows someone who might hang around someone who is even remotely linked to a terrorist.

We're learning now that according to the FBI, a number of the people who participated and perhaps led or helped organize the invasion and assault on Congress were on its Terrorist Watch List. Some apparently were contacted at their homes by federal agents and advised not to attend the June 6 White House rally and the subsequent protest at and planned assault on the halls of Congress. Some, we're told, took the warning and stayed away. Others ignored the visits and went anyway. Others on the list weren't contacted and showed up to engage in insurrection and mayhem.

That should raise some flags. If the list is supposed to be composed of people who "pose a threat of terrorism" as claimed by the FBI, then why were such people on it allowed to get even close to the Capitol building? As for those who were visited by agents, what were they actually told? Was it a threat that if they went they would be arrested? Was it not to bother going to the airport because they'd not be allowed to board a plane? Were they told that if they, as many did, intended to check weapons, including semi-automatic weapons, on the flights they were planning to take to DC, they would be barred from doing so? Apparently not.

So what is the point of this vast invasive and darkly secret (the government will not confirm if you are on the list or how your name would have been put there) program of labeling people potential or suspected terrorists?

Let me make this clear: I am not a terrorist. I don't know any terrorists or anyone who knows or is in any way linked by one, two, three or more degrees of separation to some terrorist or even suspected terrorist. I have a pretty clean record. The only time I was ever arrested was in Washington DC in 1967, when I was 18 and joined the October 27 March on the Pentagon to protest the Vietnam War. I ended sitting through the night on the mall of the Pentagon until federal marshals started grabbing, beating, arresting and then busing me and 700 other protesters to Occoquan Federal Prison in Virginia, There, after eventually getting arraigned and pleading "no contest" to the charge of misdemeanor trespass, I was released after paying a fine of $25 and receiving a five-day suspended sentence. That's my complete rap sheet...

Related Topic(s): Capitol Riot; Terrorist Threat; Watch List, Add Tags
Add to My Group(s)
Go To Commenting
The views expressed herein are the sole responsibility of the author and do not necessarily reflect those of this website or its editors.