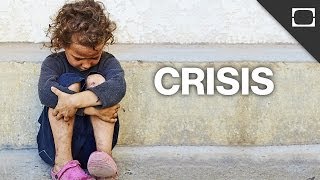 The Trump administration has less than a week to meet a court-ordered deadline to reunite children and parents separated at the U.S.-Mexico border under its "zero tolerance" policy. This comes as advocates say some migrant children have been released from federally contracted shelters with scabies and lice.

In Illinois, officials are investigating the Chicago nonprofit Heartland Alliance over allegations it housed children separated from their parents at the border, with many of the children reportedly suffering abuse and neglect. We speak with Reveal reporter Aura Bogado, who has exposed a second office used by military contractor MVM to hold migrant children. This time, the children had to bathe in bathroom sinks.

AMY GOODMAN: The Trump administration has less than a week to meet a court-ordered deadline to reunite thousands of children and parents separated at the U.S.-Mexico border under its "zero tolerance" policy. Federal officials reported Thursday just 364 of more than 2,500 families with children age five and older have been brought back together. Another 848 have been cleared for reunification, but 229 parents have been deemed ineligible, reportedly because of criminal records or because they waived reunification. More than 700 of the parents have been ordered deported.

This comes as advocates say some migrant children have been released from federally contracted shelters with scabies and lice. In Illinois, officials are investigating the Chicago nonprofit Heartland Alliance over allegations it housed children separated from their parents at the border, with many of the children reportedly suffering abuse and neglect. The Washington Post reported one boy at Heartland Alliance's facility Casa Guadalupe was repeatedly injected with a drug that made him drowsy, while another boy was denied medication for weeks after injuring his arm. The Washington Post also says children were surveilled with hidden cameras, prevented from hugging their brothers and sisters. They've been separated from their parents.

A report by Reveal from the Center for Investigative Reporting shows taxpayers paid more than one-and-a-half billion dollars in the last four years to companies operating immigrant youth detention centers that faced accusations of serious lapses in care. Children held at Shiloh Treatment Center near Houston, Texas, were restrained and injected with powerful anti-psychotic drugs against their will, making them dizzy, listless, obese, even incapacitated.

Meanwhile, the U.S. military and CIA contractor MVM has admitted it detained migrant children overnight inside a vacant Phoenix office building with dark windows, no kitchen, only a few toilets. A Reveal investigation earlier this month uncovered what some are calling a "black site" for migrant children, after a neighbor filmed children in sweatsuits being led into the building. The building was leased in March by MVM, a military contractor. Now a new report by Reveal shows MVM also operated a second office nearby, where a neighbor reported seeing immigrant children bathing themselves in bathroom sinks.

For more, we go to San Francisco for an update from Aura Bogado, who is immigration reporter for Reveal from the Center for Investigative Reporting, her latest report story headlined "Immigrant kids held in second Phoenix office seen bathing in sinks." Her other report is headlined "Immigrant children forcibly injected with drugs, lawsuit claims."

Aura, give us the latest.

AURA BOGADO: Hi, Amy. Thanks so much for having me back.

You know, we just reported this first story out two weeks ago. Back then, we knew that children, according to neighbors, were held overnight in this office, this unlicensed, unmarked office in central Phoenix. And at that time, ICE told us that its contractor, MVM, was not authorized to hold children overnight, that their contract only allows for same-day transport and that they are allowed to use that office for what ICE calls a "waiting area." The company itself, MVM, again, this company that has strong CIA ties, a defense contractor, told us--originally said that they don't operate any kind of shelter or housing, then told us that they use some of their offices as a temporary holding place for children that it's transporting. Less than a week after our initial report came out, MVM did have to confirm to Reveal from the Center for Investigative Reporting that it was indeed sometimes holding children overnight. We were able to figure that out from documents that we were able to gather about some of the children that were held there.

Then, just a few days later, we got some more information that there was a second office in which they were holding children overnight, also in Phoenix, less than a mile away from the first office. And MVM did also have to acknowledge that that was the case. So now we know about two places, that are, again, unmarked, unlicensed. And neighbors sometimes know about the existence of them. MVM certainly knows about the existence of them. But these are these -- they're not shelters. They're not exactly waiting areas. But they are places that have held children overnight. A lot of those children are children that were separated from their parents.

AMY GOODMAN: Who are the kids? Where are they from, these separated children?

Democracy Now!  is a national, daily, independent, award-winning news program hosted by journalists Amy Goodman and Juan Gonzalez. Pioneering the largest public media collaboration in the U.S., Democracy Now! is broadcast on (more...)
Related Topic(s): Detention; Drugs; Migrant Children; Parents; Suffering, Add Tags
Add to My Group(s)
Go To Commenting
The views expressed herein are the sole responsibility of the author and do not necessarily reflect those of this website or its editors.